All That Brown Can Be

Since 1972, Brown students who want to participate in ROTC—which supplies 40 percent of U.S. military officers—have had only one choice: to trek over to Providence College and train with the Army program there. In February, a few months after the Obama administration ended "Don't Ask, Don't Tell," President Ruth Simmons appointed a committee to review Brown's ROTC policies. Are they fine as they are, or should Brown have more, or less, involvement with ROTC? 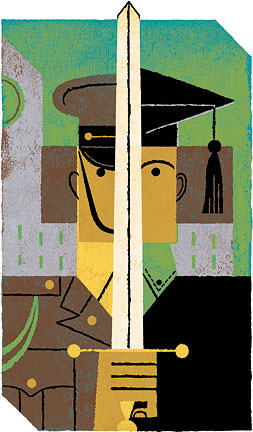 Opinions about such a polarizing issue are easy to find within the Brown community. In fact, the ROTC committee did some informal polling of its own to try to assess the will of faculty, students, and alumni. Seventy-seven percent of alumni, for example, were in favor of having Brown go back to hosting an ROTC unit, while 41 percent of students supported doing more with the program (faculty were not surveyed). On the other hand, 51 percent of students responded that Brown should do the same or less with ROTC than it does now.

Given such a lack of consensus, anyone looking for a dramatic change of direction will be disappointed in the committee's recommendations, which Simmons and the Corporation adopted in October. Although the headlines that followed emphasized what Brown did not do—invite ROTC back onto campus—Simmons, typically, took a more nuanced approach.

In her letter to the Brown community released a few days before the fall Corporation meeting, she tried to reconcile Brown's history and values with the current situation. She reaffirmed the faculty's right to govern itself on academic matters, including the decision "to expand ROTC opportunities." Because it was the faculty who passed the resolutions of 1969 stripping the Naval ROTC unit of its academic standing, she noted, and because the faculty has the right to govern itself on academic standards, only the faculty can rule on ROTC's standing today. Furthermore, Simmons emphasized, although the military's discrimination against gays has ended, transgendered men and women are still banned from military service, a policy that conflicts with Brown's fundamental opposition to discrimination of any kind.

So what are Brown's patriotic obligations? In her letter, Simmons affirmed the importance of the University's serving its country while refusing to cast this duty in strictly military terms. "The presence or not of an ROTC unit on the campus," she wrote, "is not a litmus test for Brown's commitment to serve the country loyally and honorably." Rather, Brown's obligation is to train leaders of all kinds, she argued, including military officers. According to Brown's traditions and values, she continued, such training must include an awareness of "matters of justice and equality," including the treatment of transgendered individuals. "To do this," she argued, "would be entirely consistent with the tradition of the University, a tradition that saw students at Brown calling for the abolition of slavery in the earliest days of the University."

Simmons and the Corporation also approved the committee's majority recommendation—four committee members opposed it—that the administration "explore the possibilities for Brown students to participate in cross-institutional Naval or Air Force ROTC programs housed on other campuses," thereby expanding opportunities beyond the Providence College program. In November, the Brown Daily Herald reported that the administration is planning to establish a "resource center" for ROTC and veterans resources on campus this spring, though it's possible this may be a website rather than a physical office.

In the end, all this back-and-forth about ROTC may finally be more about culture and politics than about students. A mere forty-seven Brown students have received ROTC commissions since 1988, a number that's not likely to rise sharply soon, whether or not an on-campus program exists. The harsh reality is that, with these kinds of numbers, it's unlikely the cash-strapped military would go through the expense of setting up a program on the Brown campus, even if it were invited.

Reader Responses to All That Brown Can Be