"You'd be hard pressed to find labs as good as these anywhere in the world," Columbia University oceanographer Maureen Raymo '82 says. 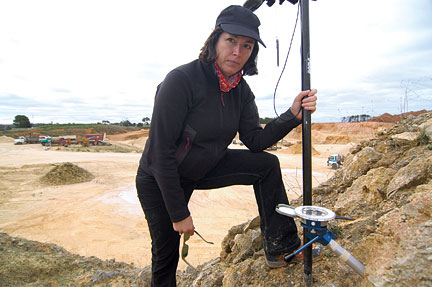 She is onboard the JOIDES (Joint Oceanographic Institutions for Deep Earth Sampling) Resolution, a nearly 500-foot-long research vessel that contains a derrick, a drill that can penetrate six miles beneath the ocean, sleeping quarters for more than 100 crew members—and even an espresso machine. The JR, as it's nicknamed, is only one of two boats in the world dedicated entirely to drilling beneath the ocean for scientific purposes. Its work goes on twenty-four hours a day as the boat cruises the world's seas gathering rock and sediment from as much as 1.3 miles beneath the ocean floor.

Raymo, who began working on the JR as a graduate student in 1986, studies the fossilized shells of foraminifera, microscopic popcorn-shaped creatures that are made from the mineral calcite. Forams, as they're more familiarly called, still live all over the world's oceans, but Raymo focuses on the remains of those from more than three million years ago. At that time in the earth's history, the levels of carbon dioxide in the atmosphere were about 400 parts per million, about the level in the atmosphere today as a result of global warming. Raymo's hope is that the fossils offer clues about what will happen to the oceans as temperatures rise.

So far, she and her colleagues haven't reached precise conclusions. They've determined that no ice sheets were found in the northern hemisphere back then, that the Antarctic ice sheet was probably smaller, and that sea level was higher than it is today, though Raymo doesn't yet know how much higher.

Raymo grew up in Easton, Massachusetts, and says it was Jacques Cousteau who inspired her as a child to become an oceanographer. She also loved hiking, camping, canoeing, and kayaking all over New England, and so she chose geology as her Brown concentration because she saw it as a way to be a scientist who worked outside. After a short stint as a Ratty dishwasher during her freshman year, she lucked into a job filing reprints for Brown paleoclimatologist Warren Prell. While he taught, she'd sit in his office with a pile of articles.

"I'd always read the titles and the abstracts," she says, "and it seemed like an incredibly interesting field." Oceanography, she says, lets her combine her passion for studying the far past with her love of being outside.

After earning a PhD at Columbia and completing a post-doc in Australia, Raymo worked at UC Berkeley, MIT, and Boston University. This year she returned to Columbia as a research professor and director of the university's Lamont Deep Sea Sample Repository.

Raymo is in India this fall on a Fulbright, analyzing fossilized coral reefs and sand dunes to estimate past sea levels. She also plans to study in Madagascar. Analyzing her data may then confine her to the laboratory for a time, but you can be sure that she will head out on the seas for high adventure as soon as she can.