For Vera Samak wayne, there was always something about flowers. As a child she enjoyed the flowers growing in her mother's garden and admired the close-up pictures her father, a doctor, took of them as a hobby. After her own children left for college, Wayne founded a small floral-arrangement company called Proper Setting in 1992. It sold both flower arrangements and flora-inspired jewelry. 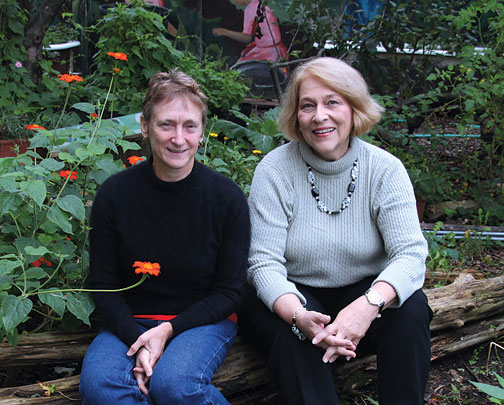 Wayne's latest floral venture is as a board member of Southside Community Land Trust, which includes thirteen community gardens throughout Providence. Through the land trust, about 750 families plant and grow their own food in small plots they can purchase or rent for $15. Southside also helps low-income communities get access to locally grown produce at affordable prices through markets and plant sales. This year, Wayne is cochairing the organization's 30th-anniversary committee and planning several celebratory events with picnics, concerts, and, yes, flower sales.

Wayne was born in Budapest, Hungary. During World War II, she and her family escaped from Eastern Europe by jumping a train in Slovakia and avoiding guards who were checking tickets. On their journey, Wayne and her younger sister hid under branches at a hunting lodge to evade Russian soldiers. After a year in Germany, her family arrived in New York City in May 1949 on a converted troop ship. Wayne was only five years old and spoke no English.

At Brown, Wayne studied Russian language and literature. She lived in New York and San Francisco, then returned with her husband and two daughters to Providence and worked as an executive assistant at the Wheeler School until her retirement in 2008.

Wayne first got involved with Southside in 2006, when she was asked to create a floral arrangement for a fund-raiser. "What draws me to Southside," she says, "are the interactions among people from vastly different cultures," which Wayne appropriately calls "the cross-pollination of nationalities working side-by-side." Given her childhood experiences in Nazi-controlled Hungary, she says it is enlivening to see a Hmong family, for example, working alongside one from Liberia.

"They both have limited English, but they connect over gardens," she says. "Watching these families sharing crops and farming methods is inspiring."

Wayne works closely with Southside executive director Debbie Schimberg '80, who founded the Land Trust the year after she graduated from Brown. Schimberg says that she was not particularly interested in urban development. "It was not like I was seeking to solve a problem," she says. "I just thought, 'Wouldn't it be neat if this was a garden?'" The land she is talking about had been a junk heap, replete with massive, rusting cars. Now this first Southside garden has grown to include five acres, and the surrounding neighborhood of restored nineteenth-century homes has been spruced up. Like Wayne, Schimberg says she prizes the multicultural aspect of the Southside gardens, describing them as "living anthropology."

Southside Community Land Trust hopes to add two community gardens each year for the next three years. Wayne will continue to serve on the fund-raising committee and as a board member. One of her greatest satisfactions, she says, is watching how gardening has energized the surrounding community.

"This is visibly enduring," she says. "You can experience your own legacy."

Former BAM intern Maggie Lange '11 is a writer in Providence.