Want to attract a mate online? Then keep your political beliefs to yourself. That's the conclusion from a recent Brown study that found people who use some of the more popular online dating services would rather admit their weight than disclose their political leanings. They'd rather be described as fat than liberal. 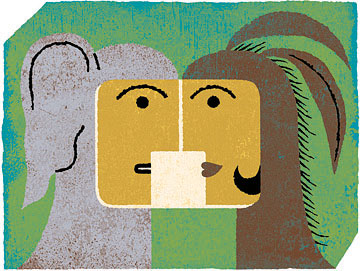 In the study, published this fall in Evolution and Human Behavior, political scientist Rose McDermott and her colleagues surveyed 3,000 men and women active on online dating services. She found that only 14 percent included political interests among their likes when creating their profiles, while 17 percent confessed to being fat.

"When asked to describe their body type, a larger proportion of our sample voluntarily described themselves as either 'heavy set,' having 'a few extra pounds,' or 'stocky' than listed 'politics' as one of their interests," wrote McDermott and her coauthors, University of Miami political scientist Casey Klofstad and Penn State University political scientist Peter K. Hatemi.

McDermott says she undertook the study to determine why couples so often end up with the same political beliefs. Her study suggests that singles are interested in other things early in a relationship, while more serious matters such as politics emerge later. According to McDermott, compatibility is more important in long-term relationships because, from an evolutionary perspective, parental harmony increases the likelihood of successfully raising offspring.

Among the study's other findings:

• Women are 8 percent less likely than men to report an interest in politics.

• A higher income, education, and degree of civil engagement (i.e., volunteerism) increases the likelihood of listing politics as an interest.

• Older daters and those with higher education levels were more willing to express a definitive political preference, such as "very liberal" or "ultra conservative."