Elie Hirschfeld '71 was not much of an athlete growing up. When a good friend talked him into going for a run during his junior year abroad at the London School of Economics, he fainted after a quarter mile. He jogged a bit after graduating from Brown, and like most dads he biked with his kids, but that's about all the sports he could do. 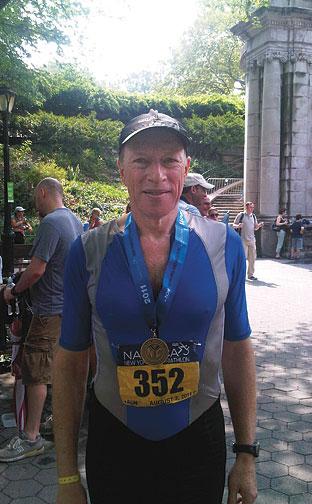 A self-described "terrible swimmer," Hirschfeld decided almost thirty years ago to at least learn a proper crawl. Then, a longtime resident of Long Island, he read an article one day in the Hampton Press about triathlons. He tore it out and saved it. In the spring of 1985 he decided to start training for a local race. "I did it and I loved it," Hirschfeld says, "and I guess I never stopped."

Soon he was obsessed. A successful New York City real estate developer, Hirschfeld, who is sixty-one, has so far finished eleven marathons and more than seventy-five triathlons, two of them Ironmans. In 1990 he celebrated his fortieth birthday by completing the Hawaii Ironman, one of only four Ironmans in the world at the time. He marked his sixtieth by finishing the Israman Ironman Triathlon in Eilat, Israel, with his daughter, Daniella. In that one, Elie finished first in his age group, and Daniella, who completed the Israman Half, finished second in hers. Hirschfeld jokes that he'd like to do another Ironman at eighty. Don't bet against him.

Preparing for his first Ironman, Hirschfeld moved his family to Israel for six months for serious training, flying back and forth to New York City for business meetings. Part of his training at the time involved jogging from the airport in Israel to his rented home eighteen miles away in Herzliya.

How does he do it? Hirschfeld has been able to remain mostly injury free while participating in three grueling events: swimming, cycling, and running. He believes the variety has saved him. "That is one of the big positives of this sport," he says. "The cross-training really helps."

Why does he do it? "Basically, I enjoy it," Hirschfeld says. "Somebody else might enjoy chess. Somebody else might enjoy bridge. Whatever they enjoy, they enjoy. And many world-class triathlons are staged in beautiful places" said Hirschfeld. The swim for the 2011 Paris Triathlon, for example, was in the Seine, and the cycling leg began at the Eiffel Tower. And what's not to love about running through the streets of Paris?

Hirschfeld says that most rewarding now is sharing his passion with Daniella. After she asked him to accompany her in her first triathlon five years ago, he responded by finishing first in his age group for the first time. "It is great bonding for us," he says. "We can talk the talk. We can talk the lingo of the sport. It is very nice."

Hirschfeld has also completed numerous century bike rides. In 2011, he did the Empire State Building Run-Up as wellas the Rockefeller Center Run-Up, in which he finished second in his age group.He is also an avid skier— he worked as a Vermont ski instructor while attending NYU law school—and plays tennis and golf.

What's his next goal?

"A tremendous goal is just to continue," he says.