John Manchester arrived in Lewisburg, West Virginia, in the summer of 1982, hoping to start anew. The Maine energy sales company at which he worked had closed, and, at the time, he had a two-year-old child and his wife was seven months pregnant. When he arrived with his family in Lewisburg, population 3,800, rain was pouring down. It was late at night. Their car broke down. 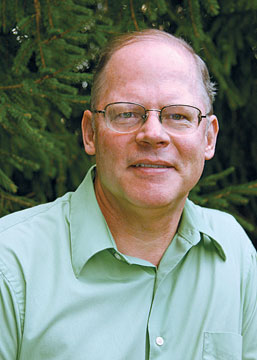 In no time, one of his new Lewisburg neighbors was standing in the rain beside Manchester's car offering to help. The neighbor and Manchester spent the next hour repairing the exhaust pipe. It was at that moment that Manchester knew that Lewisburg would be a good home.

On June 10, 2003, Manchester was elected mayor of Lewisburg, and, just this past year, the town was dubbed the "Coolest Small Town in North America" by Budget Travel magazine. Nestled in the Greenbrier Hills on a bluegrass plateau, Lewisburg combines a vibrant culture with small-town coziness. It is perhaps most famous now for its annual spring chocolate festival, which Mayor Manchester attends in a Willy Wonka costume.

Manchester grew up all across the country, spending time in states as varied as Alabama, Mississippi, New York, and Massachusetts. After concentrating in American civilization at Brown, he earned a master's in technology education at West Virginia University in Morgantown and fell in love with the area. He bought some land, knowing, he says, that one day "I would return and live a quiet, rural life."

Manchester first began participating in Lewisburg's civic life in 1989, chairing a board looking to restore the town's famed Carnegie Hall, which, along with the one in New York City, is one of four performance spaces that Andrew Carnegie donated to the public. By the 1980s, though, the four-story, eighty-year-old Greek Revival hall was falling apart, so Manchester headed a nonprofit that would eventually raise $3.4 million to save the building.

As mayor, Manchester has also established two designated wilderness areas on Lewisburg's northern border, where the Monongahela National Forest covers a lush 900,000 acres. As a hiker, hunter, and camper, Manchester wanted to increase protection within this area, which was being degraded by recreational vehicles.

Manchester headed a public campaign urging citizens to support a Congressional bill to protect the area. In 2009, President Obama recognized Manchester for his efforts by inviting him to attend a bill-signing that would grant wilderness protection to more than two million acres of land, including 37,771 acres in Monongahela.

"This place rejuvenates the spirit," Manchester says. "It is important to protect these places, to make them special, before they get gobbled up by somebody's great development plan."

Reader Responses to The Rural Life