"It is rocket science," insists Jeremy Russell '11. He holds out a thin, flexible kneepad made by G-Form, a start-up founded by a group of Providence cycling buffs. The company took off last fall after it developed a way to use molded foam padding to create lightweight, comfortable athletic gear. 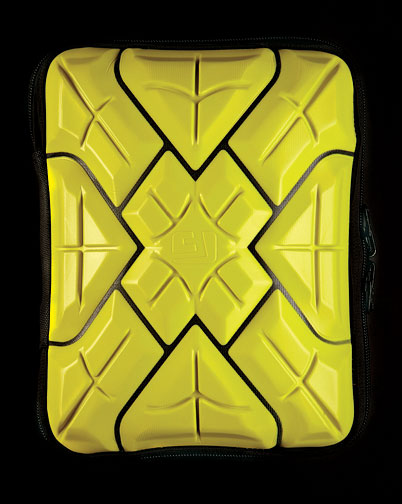 G-Form calls its innovation Reactive Protective Technology, or RPT: that's the rocket science Russell mentions. To demonstrate its effectiveness, he, Maria Macrina '11, and Lily Wray '10 take a bag of M&Ms, wrap it in a competitor's padding, and place it on the floor. Russell holds a bowling ball three feet over the M&Ms, drops it, then tears open the bag to reveal that several have been pulverized. He repeats the process with the candies wrapped in G-Form padding, and although the bag has ripped, the M&Ms are intact.

While most foams compress under pressure, G-Form's padding stiffens on impact, absorbing 94 percent of the energy directed at it, Russell says. "It's a non-Newtonian material," he explains, like a slurry of cornstarch and water, which remains semi-liquid until you strike it and it hardens.

If G-Form had a mascot it might be a Brown Bear. The company's CEO is Dan Wyner, a computer science grad student who took a leave from his studies after the business picked up dramatically last fall. The president is Danny Warshay '87, a start-up veteran who teaches a course in entrepreneurship and new ventures at Brown. Handling marketing and publicity is Lily Wray, who came to G-Form from McKenzie and Co. Visual arts concentrator Maria Macrina joined the product development team after meeting Wyner in a computer science class. And Russell, a former Brown hockey player who earned a joint AB and ScB in economics and neuroscience, came on board after taking Warshay's entrepreneurship course. Russell wears a number of hats at the company, says Warshay —from finance to social media and sales.

G-Form's most famous product is the Extreme Sleeve, which was designed to save a tablet computer from just about any crash—including being dropped from an airplane. To prove the point, the company did just that to an iPad last April, and the resulting video went viral on YouTube.

These days, the G-Form team is developing new products to protect soldiers and athletes, including Brown lacrosse players. One public fan is extreme snowboarder David Hidalgo Perlas. With that kind of support, the sky might literally be the limit for G-Form.