Taryn Leavitt '81 didn't set out to become a jeweler. For most of her professional life she was a news reporter. 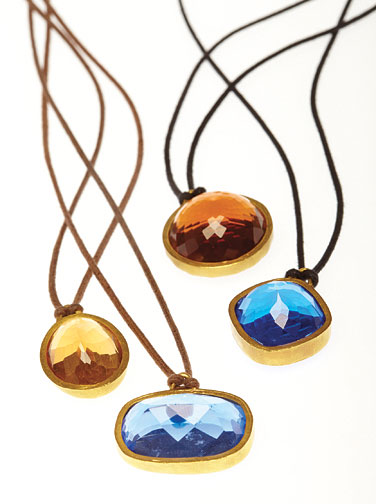 As a student she was the public affairs director at WBRU and concentrated in literature in society. After graduating she worked for UPI radio, then spent ten years as a reporter with Financial News Network and CNBC before switching to Fox TV, where she was a New York City news reporter. One night, while working a shift from three in the morning until noon, she had an epiphany. A man who had taken two hostages called Fox and asked to meet with a reporter, and Leavitt was the only one on duty. Professionally it was a golden opportunity. But, as the mother of two small children, she didn't want to take that risk. She loved telling stories, she says, but realized "this is not the most important thing I could do."

At the time Leavitt and her husband were collecting folk art, and she had been slowly taking classes toward a master's in folk art studies at NYU. "I figured I was on the twenty-year plan," she jokes. After quitting the TV business, she got more serious about it, and, when she took a light-metal sculpture course, she found that "it was much more fun than writing papers." That led her to study ancient jewelry-making techniques in depth.

"I do it all from scratch," she says. Using a plumber's acetylene torch, she creates her own alloys, melting raw gold with precise proportions of copper and silver to create eighteen-, twenty-, or twenty-two-karat gold that she irons out into sheets or pulls into wire. "It's all bending and hammering and soldering," she says. "It's very time-consuming. . . . Some of my pieces take months."

The price of gold has quadrupled since Leavitt began creating jewelry, and in response she started making beaded necklaces last year. Still, her most characteristic pieces seem to be inspired by individual gems, which she frames in settings that feel both time-honored and funky. "I like to think I add a little me to these styles that have been around forever," she says.

Leavitt has a penchant for raw diamonds, which she attaches to gold chains like a crust of sugar candy. "I like the sparkle and the roughness of them," she says. Although she buys most of her stones in New York City, she also picks up gems and ideas while traveling. A trip to India inspired an evocative and intricate collection, and she's purchased tanzanite and aquamarine in South Africa, and jade and pearls in China. On family vacations, she says, her kids will groan, "Uh-oh, Mom's going to another gem dealer."

With her son in college and her daughter a high school senior, Leavitt says she's ready for a second career. "It was an expensive hobby for a long time, and now I'd like to make it into something," she says. "Now, I actually have the time and no excuses."

Reader Responses to Inspired by Stone