If you open An Essay Concerning the Reconciling of Differences Among Christians at the John Carter Library, you'll see chicken scratch along the top, bottom, right, and left margins of the pages. Who wrote these indecipherable notes? A team of four students, three faculty advisers, and an archivist is trying to determine whether, as has long been suspected, the scrawl is by theologian and Rhode Island founder Roger Williams. The notes may reveal a thinker in the process of defining the entire notion of religious freedom. 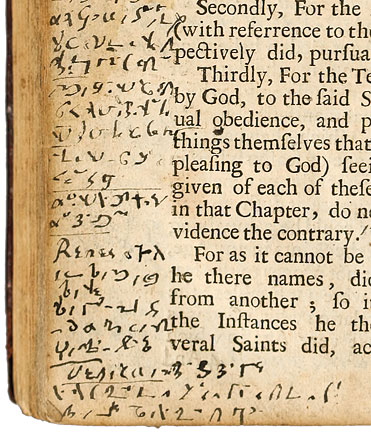 John Carter brown Library
If the jottings are more than a list of Biblical names and verses, the team will have made a major discovery. "It would probably be the most extensive private document we have from Williams," says Stephen Foley '74, an associate professor of English involved in the project.

Whoever wrote the marginal notes used shorthand, a system of symbols corresponding to words that started being used in England's courts only in the late 1500s. When Williams was an adolescent in early seventeenth-century England, which is probably when he learned the technique, there were still several competing versions of shorthand in use. It's not clear yet which of them Williams knew. It's also likely that, as was common practice at the time, he had a supplemental system of codes that he'd developed only for himself and which he intermingled freely with the more widely used shorthand.

Brown's Eugene Charniak, a computer scientist, and Jeff Hoffstein, a mathematician, hope to bring their expertise in cryptology to breaking whatever code Williams was using. Some words are clearly legible in the text—most of them names of books in the Bible—and they will serve as a starting point for the researchers, Foley says.

As for the actual book, Williams is almost certainly not the author, who is identified as "late deceased" at the time the book was published. The book's title page was either torn out or never printed. (An Essay Concerning the Reconciling of Differences Among Christians is actually its subtitle.) The page on which the subtitle is printed indicates that the true author's identity was concealed because he had run afoul of British censors in earlier works. Foley speculates that the volume was passed around covertly, which would explain why the publisher made it so difficult to figure out its origin.

No one involved knows yet how long the project will take. According to Kim Nusco, the reference and manuscript librarian at the John Carter Brown Library, "That's also part of the mystery."

Reader Responses to Breaking the Code