Déjà Vu (All Over Again)

In a repeat of last year's season, on November 27 men's soccer made it to the Sweet 16 round of the NCAA tournament, but this time fell to St. Mary's College of California in overtime on Stevenson Field. 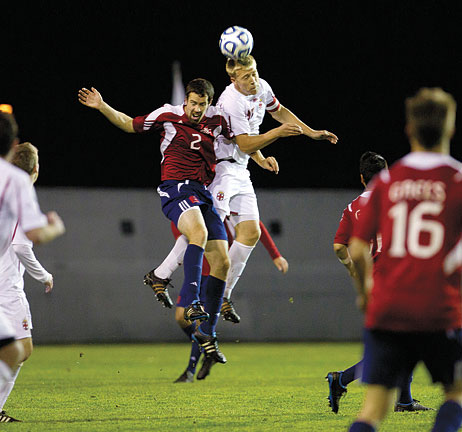 Mike Cohea
Despite playing at home, the Bears fell to St. Mary's in overtime.

The Bears had begun their NCAA tournament run ten days earlier with a dramatic comeback win over Fairfield, which had won its previous thirteen games. In the final eleven minutes of play, Brown scored three goals to erase a two-goal deficit. The Bears followed that triumph with a 1–0 victory at ninth-seeded St. John's, a perennial Big East and national power.

Brown then hosted St. Mary's in the Sweet 16. The Gaels struck first, but the Bears answered with two goals in the second half before St. Mary's tied it to force overtime. St. Mary's scored the golden goal in the game's ninety-eighth minute to end Brown's season.

The Bears finished with a 12–5–3 record and a 4–1–2 Ivy League mark. With twenty Ivy League titles, Brown has won more than any other men's soccer program in the league. It also has twenty-six NCAA Tournament appearances, including six in the last seven years.

"Winning the program's twentieth Ivy championship and advancing to the Sweet 16 in the NCAA tournament made for some great memories," said head coach Pat Laughlin. "Strength of character, physical and mental toughness, as well as some outstanding soccer made this a season to remember."

Reader Responses to Déjà Vu (All Over Again)