What draws an artist to revisit the most harrowing moments in human history? And how to describe that heart of darkness without being pornographic? 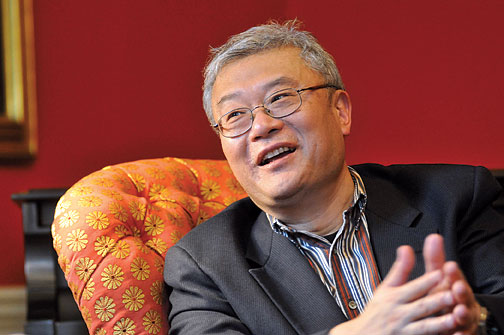 Frank Mullin
Those questions dogged the November visits of two writers whose attention has lately been consumed by the Nanjing massacre, the six weeks of torture, rape, and slaughter that followed Japan's conquest of China's capital city in 1937.

Brought to campus by Brown's Year of China program, National Book Award–winning novelist Ha Jin read from his new novel, Nanjing Requiem, and poet Wing Tek Lum '68 read from a collection of ninety poems he has written about the massacre.

Lum read his poems in a soft but urgent rush of words. One poem described in immediate and excruciating detail how Japanese recruits used a Chinese soldier for bayonet practice. Another depicted a Japanese soldier hacking off the legs of a corpse to take his boots.

In contrast, the female narrator of Jin's Nanjing Requiem tells her story in a voice that is diligent but spare. The novel is based on the true story of Minnie Vautrin, an Iowa farm girl who ran Ginling College, a women's missionary school outside Nanjing. During the second Sino-Japanese War, it housed 60,000 refugees, whom she tried to protect. After returning to Iowa traumatized by the events, Vautrin killed herself. Jin tells the story through Vautrin's friend and assistant, a Chinese woman named Angling. Like The Great Gatsby, Jin observed, it's an obituary told by a friend.

After reading from their works, the two writers met with a panel of scholars to discuss the relationship between history and art, and the particular role of poetry and fiction in preserving the memory of horrors like Nanjing's. China estimates that 300,000 people were killed during the genocide, but in Japan some revisionist historians and nationalists still contest the number of victims and the nature and extent of the atrocities.

To historians on the panel, a key priority is pursuing the truth while correcting the lies propagated by the deniers of genocides or the Holocaust. A poet's task is different, said Lum. "We're in a university and have to be fair and balanced," he told the panelists. "I've tried to read the Japanese criticisms, et cetera, but I have to tell my truth. If you don't like it, you can write your own poem. We have to take a stand."

"I agree," Jin said, adding that he often assigns The Grapes of Wrath to his students at Boston University because it so marked the landscape of its time. "You have to have the illusion of truth," he said. "If well done, that work will remain a kind of small landscape."

Jin says that, given how painful Nanjing Requiem was to research and write, he's happy to put it behind him. What compelled him to tell this story? "It's really very simple," he told the panel. "I hadn't seen any good literature on this topic. I wanted to create a piece of art based on that event. The intensity of one person's pain is equal to the suffering of humankind."