How to Enjoy Exercise

Do you work to stay in shape? Are you a runner, a bicyclist, a swimmer, a gym semi-regular? If so, you should get to know Bob Rothenberg. Rothenberg '65, '67 MAT has been running at a high level and training elite runners for more than fifty years. When he gives training advice, runners listen. A standout distance runner at Brown, as a junior he helped his cross-country team reach the nationals. After graduation and a stint in the Peace Corps, he coached high school track in Maryland with his wife, Anne, for fourteen years, picking up eighteen state championships along the way. 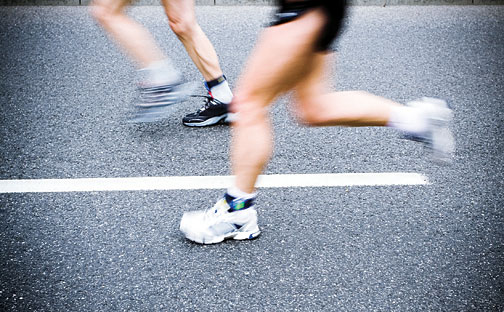 Blas/VEER
In 1983 Rothenberg returned to Brown to direct the men's and women's track and cross-country programs, and did so until his retirement in 2000. On his watch, the track and cross-country teams captured eleven heptagonal crowns and set more than 100 school records. His athletes also enjoyed several top-twenty finishes at the NCAAs, including the men's cross-country team's ninth-place finish in 1987 and the women's ninth-place finish in 1999. After he retired, Rothenberg spent the next five years volunteering his time to work with such elite post-collegiate runners as Trinity Gray '00, who at the time was the fastest 800-meter runner in the country.

Bob and Anne now volunteer at the Ronald McDonald House. Along with Jon Hird '74 MAT and Anne Sullivan Hird '81, they have formed the Ronald McDonald House Running Club, which boasts more than 190 members and includes runners of all abilities, aged twelve to seventy years old. The Rothenbergs have helped organize races that have raised tens of thousands of dollars for the charity.

Out of all this experience come several training tips that Rothenberg says apply to athletes of all kinds. You may want to consider them as you build your own exercise program:

Be realistic about your time commitment. It's easy to say you're going to train for a marathon or a triathlon. But life often gets in the way. Start by setting realistic goals. You'll feel better if you have a goal you can actually achieve.

Be aware that, as we get older, we lose flexibility. By the time most of us hit our mid-thirties, we've developed sedentary lifestyles, working at jobs that don't require much range of movement. Sitting in front of computers, we tend to perform the same motions over and over, and we spend a lot of time sitting still, often in positions that are not good for our spines. Take time to stretch and go for walks. Keep your joints flexible.

Cross-train. Don't get into a rut by just swimming, or running, or bicycling. Build variety into your training schedule so that all your muscles get a workout. Cross-training can also help to relieve the boredom that a regular, monotonous workout can trigger.

Find a training group or partner. People who exercise can often rationalize taking a day off now and then. But a day off can become two or three, until you're no longer going to the gym at all. Training with a group or a partner will make it more difficult to blow off a run or a workout.

Find a coach. Training gets more difficult as you age. A good coach will help you keep your goals in mind and will adjust your program based on what he or she observes about your training.

Take occasional recovery days. Recovery days are not the same as rest days, though those are important as well. A recovery day means a workout that is well below your peak pace or intensity. Stress the body twice a week, say, and back off the intensity on the other days. Particularly as we get older, the body needs recovery days to replenish itself and allow muscles to heal.

Be patient. Increase distance or intensity slowly. Especially if you have been away from training for a while, increase your workload by small increments.

Listen to your body and make adjustments accordingly. There's always a warning sign before serious injuries. Check out that balky knee before a ligament goes. For most amateur athletes, continuing to train through several days of pain is a recipe for disaster.

Enjoy the ride. The true benefits come from the process of feeling stronger, healthier, and more energetic. If exercise becomes a chore every day—and we all have days like that—you won't keep it up. Listen to the birds, check out the pedestrians as you run. Exercise should relieve stress, not increase it.

Reader Responses to How to Enjoy Exercise