Roger Williams and the Creation of the American Soul: Church, State, and the Birth of Liberty, by John M. Barry '68 (Viking). 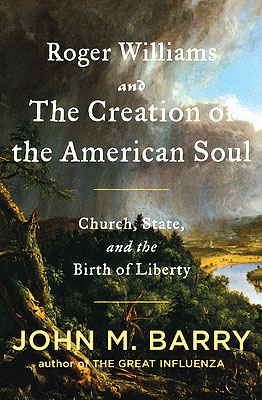 Roger Williams, the founder of Providence, Rhode Island, and the first Baptist congregation in colonial America, did not stay long in Providence, in the Baptist congregation, or, eventually, in any church. A dissenter against most state and church authorities in England and the colonies, Williams was what philosopher George Santayana typed as a "pensive or rabid apostle of liberty." Were there a Mt. Rushmore for contributors to religious liberty in the United States, Williams would be a candidate alongside James Madison and Thomas Jefferson. But Williams would have been too restless to pose.

Being remembered and memorialized is easier if one is a president or head of an institution like the United States of America, but the English-born Williams was anti-institutional. To keep him and his kind on the public mind, biographers and historians have to be what New Englanders called "remembrancers." John M. Barry '68, who has written acclaimed books on such physical events as the deadly 1918 influenza pandemic and the great Mississippi flood of 1927, here sets Williams into the context of the spiritual events of his time. Christianity in the Western world had always fused the authority of church and state, resulting in little religious freedom. It was Williams, along with a few other dissenters, who set in motion what since 1787 we take for granted as the separation of church and state.

Williams belongs in Santayana's "pensive" category. Well-educated at Cambridge and an inventive Christian individualist in matters spiritual, Williams is remembered more for being what critics saw as a "rabid" apostle. He fought off tyrants and persecutors, who were abundant while Puritanism took shape in England before splintering into contentious sects in New England.

Williams was not one to compromise, and the titles of his long tracts against the civil authorities do not suggest civil dialogue: The Bloudy Tenent of Persecution Yet More Bloudy. He chastised formally ordained clergy in The Hireling Ministry None of Christs. To him and to many, George Fox's Quakers were not quiet, peaceful, or passive, as evidenced in Williams's George Fox Digg'd out of His Burrowes.

In Rhode Island, Williams branched out from religion, demonstrating frontier scholarship and pursuing justice as he reckoned positively with Indians. He bought land from them, and, during his exile in the New England wilderness, they returned favors and protected him. Williams knew some of their languages and honored them in A Key into the Language of America.

The Rhode Island he helped invent, and for which he cared in his edgy way, was not regarded gently by other New England colonists. Some of them, looking at the dissenters who settled there—whom they considered human refuse—spoke of the colony in Latin terms for which no one needed a translator: Rhode Island was New England's latrina. As freedom began to prosper, factions were dismissive of one another, and eventually Massachusetts Bay violently dismissed Williams, banishing him in winter to the wilderness. There he endured almost indescribable privation and pain, all in the interest of being true to his conscience in order to be true to his God and his truth. He coined the phrase "soul liberty" for this, and it provides the theme of this book.

A sophisticated sorter-out of theological strands, Barry explicates such complexities as predestination and, better than most historians, catches on to what Williams, early Baptists, and, later, Seekers, all called "soul liberty." But he also handles matters of law and punishment and the facts of English and colonial life in a brutal time with credible attention to engrossing detail. Barry does not turn this history into a tract for a modern audience. He does not need to: the point is obvious to those of us who inherited the fruits of Williams's, and later Jefferson's, sacrifices and arguments in the face of coercion, law, repression, and punishment in the divine-human transactions.

Santayana argued that "English liberty" later prospered in the United States because in the republic many citizens and their leaders learned the values of civil discourse, give-and-take, and compromise. It's ironic that much of this is derived from the efforts of such uncompromising apostles as Williams. We can better understand what coercion can effect in church and state by reading what amounts to a virtual adventure story about "soul liberty" in books like The Creation of the American Soul.