If we ever do send astronauts to Mars, it's a sure bet that they'll have to pee along the way. They could expel the waste into space or store it in containers until they return to Earth, but a group of former and current students at Brown and Stanford may have come up with a better idea: turn it into concrete. 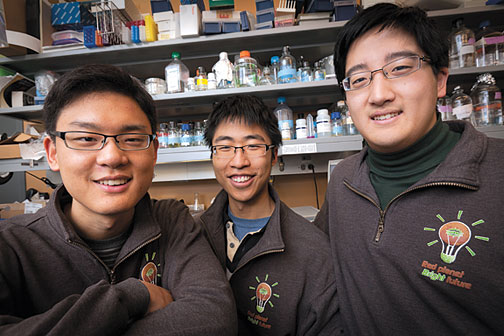 Scott Kingsley
Julius Ho '12, Max Song '14, and Jovian Yu '12 wondered what they could do to help the exploration of the Red Planet.

The nine-member Brown-Stanford squad first met this June at NASA's Ames Research Center in northern California. They'd joined together to compete as a team in the upcoming International Genetically Engineered Machine (iGEM) Competition. iGEM challenges groups of young researchers to come up with advances in the field of synthetic biology. Synth bio, as it's known, involves manufacturing snippets of DNA that will carry out the same function in a variety of organisms.

Working with two advisers—NASA astrobiologist Lynn Rothschild '85 PhD and Brown biologist Gary Wessel—the Brown-Stanford team decided to see what synth bio could do for space exploration. "We thought: what can we do to make things easier for life on Mars?" says Julius Ho '12, who along with Jovian Yu '12, Max Song '14, Andre Burnier '11, Eli Moss '11, and Lei Ma '13 composed the Brown alumni and students on the iGEM team.

The group reasoned that travelers to Mars would want to build shelters and laboratories. Hauling all the cement needed to do this from Earth to the Red Planet would involve sending up several spaceships, at immense cost. The Brown-Stanford squad decided it would be much better if the astronauts made the cement after arriving on the planet. The group believed synth bio was a way to achieve this. All the astronauts would need to bring along were a few cell samples.

Here's how they did it: They engineered a fragment of DNA code that, when implanted in bacteria, enables bacteria to break down a compound called urea. Urea happens to be a key ingredient in urine. When urea gets broken apart, it splits into carbon dioxide and ammonia. The CO2, now set free, ionizes and bonds with other molecules, strengthening the connections among all of them. In fact, it serves as a thickening agent, congealing all the molecules together.

So, they reasoned, if you take the genetically modified bacteria, add urea, and then throw in some Mars dirt, the dirt thickens, and, as it turns out, you have exactly the right ingredients to make concrete.

Not satisfied with solving this problem, the Brown-Stanford team tackled a second project, this time modifying bacteria excrete sucrose, a simple sugar. Again, the astronauts could bring along a few vials of modified bacteria to produce a plentiful supply of carbohydrates.

At the iGem regionals in Indianapolis this past October, the Stanford-Brown team finished in the top four. A month later, it advanced to the international iGEM held at MIT, which featured more than ninety teams from around the world. This time, the Brown-Stanford unit made it to the semifinals before being eliminated. The competition was eventually won by the University of Washington.

Along the way, the Brown-Stanford team visited NASA, meeting with some of the organization's key leaders to preach about the benefits of synth bio. "Right now," says team member Jovian Yu, "this is all still very much proof of concept, but I think in a surprisingly tangible way our work this summer was able to reach an audience of policy makers and administrators."

Reader Responses to Mortar on Mars