By Alessandra Wollner '10 / November/December 2012
November 27th, 2012
Barbara Anderson Rotger ’86, administrative coordinator of the gastronomy program at the Boston University Metropolitan College, is a scholar and collector of recipe boxes. She finds them on eBay or at garage sales, often packed with recipes their owners collected over a lifetime. Her master’s thesis at BU was titled, “How to Read a Recipe Box: A Scholar’s Guide to Working With Personal Recipe Collections.’’ 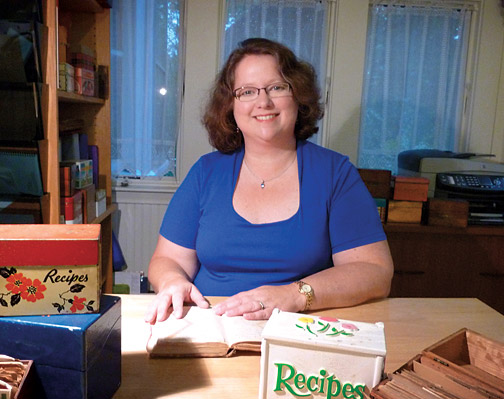 Courtesy Barbara Anderson Rotger
Rotger sifts through recipe collections for clues about our past.
BAM When did you first become interested in food?
BR I have to say, it’s always been like that. My family jokes that my crib was in the dining room and ever since then I’ve been interested in food.

BAM Do you use the recipes inside them?
BR Everybody always asks me that. To be honest, very rarely. They’re mostly mid 20th century collections, and there are an awful lot of Jell-O salads and cream-of canned-soup recipes. When it comes right down to it, it’s really hard for me to make a Jell-O salad for dinner.

BAM What makes working with recipe boxes so appealing to you?
BR Everyone understands food as communication. The recipes I work with communicate all kinds of things: social status, ethnic and religious identity, and societal and gender roles. For example, a recipe box with recipes for dishes like “Chicken Church Casserole” or “Funeral Hot Dish,” both of which yield fifty servings, says to me, “I am active in caring for my community.” Similarly, a World War I–era collection that is full of “wheatless” and “meatless” recipes says, “I am patriotic, and will support the war effort by following government instructions to conserve these foods.”

BAM How do you even begin to study a recipe box?
BR I start by indexing a whole collection and looking for patterns. I categorize it—a breakfast cake or cookie, a main dish, a salad, then I record the format of the recipe—handwritten, clipped from a newspaper, clipped from a product package. Then, I use the index the way I would a cookbook index. From that point, I formulate a question I want to ask. Maybe it’s “Was this person making their own alcohol during Prohibition?” You might see that, “Oh, look, this person has five recipes that have ‘eggless’ in the title. Does this tell me that an egg shortage was a problem?”

BAM How do cookbooks and recipe boxes differ?
BR Recipe books are often very cutting-edge and trend-oriented. They don’t give you a good idea of what food was like in the home, and personal recipe collections are a much better source if you’re interested in what people actually ate. Cookbooks say, “This is who I’d like you to think I am.” Recipe boxes say, “This is who I am.”
What do you think?
See what other readers are saying about this article and add your voice.

Reader Responses to The Culinary Detective