I’ve never considered myself particularly adventurous. So when I decided to spend my junior year abroad in Israel, I surprised many, but mostly myself. I had never been to Israel. 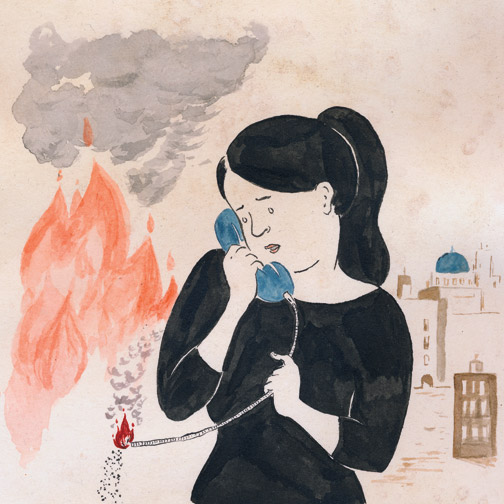 Aside from leaving the comfort of my home and parents, I was also leaving my boyfriend of two years, Peter Levine ’95. Only several days into my six-month stay, I called my mother from a pay phone—this was 1995—and through poorly hidden tears told her I’d made a mistake. I should not have come. I missed my parents and friends, and I ached physically for Peter. For the first two weeks, I would curl up every night on top of my sleeping bag and wish that something would happen so I could go home.

Then that something happened. I was daydreaming on a bus ride across Jerusalem, staring out the window, when we went through the ultra-Orthodox neighborhood of Ramat Eshkol. I don’t remember hearing an explosion, just the panic and adrenaline coursing through my body. Our bus was intact, but the two buses directly in front of us had been blown up. Our driver was screaming in Hebrew while passengers frantically tried to get off. Outside, people were running from their apartment buildings into the street. There was smoke everywhere, and it smelled of burnt rubber and gasoline. Five people were killed that day (including the female bomber), and scores injured, including several students in my program.

When I told my parents about the bombing, they insisted I come home. At first I felt relief, but now that I was being told to leave, I wasn’t so sure I wanted to go. Somehow word got to Peter that I wanted to talk, and on a borrowed cell phone he reached me in the middle of the night several days later. His voice sounded far away and hollow. I yearned for him to tell me to come home, to beg me to come back to him, to plead for my safety. But he didn’t.

When I suggested that coming home seemed like the prudent thing to do, I heard a hint of disapproval in his voice. He clearly thought I should stay, even if he wasn’t going to come out and say it. The idea of letting Peter down scared me. Even though we were both very young, I knew I wanted to marry him, to share my life with him.

For the next few days, I was angry with him. Finally, I realized I felt that way because I knew he was right. I had chosen Israel because I knew it would be hard for me to be so far away, but a part of me needed the challenge of living abroad. My childhood had been sheltered in the best of ways. Having met Peter in October of my freshman year, I had moved directly from my parents’ arms into his. Now it was time. I needed to be on my own. If I left, I knew I would be disappointed in myself.

So I stayed, and by choosing Israel, I chose myself. Now, almost twenty years later, I appreciate how important that decision was. Peter and I now have three daughters, and I know that at some point in the (faraway!) future, they too will need to learn to trust in themselves. I hope I will have the strength and courage to let them figure it out on their own.

Reader Responses to Growing Up