For the seventh time in eight years, men’s soccer advanced to the NCAA Tournament. “The men on the soccer team continue to amaze me,” head coach Pat Laughlin says. “Their commitment, energy, and focus are rare.”

Once again, the Bears showed a flair for the dramatic. Brown opened the tourney with a 2–0 win over Drexel in Philadelphia before playing the number-two seed, Maryland. Brown shocked the Terrapins by taking an early lead, but Maryland fought to a tie before halftime. Just when it looked as if overtime was imminent, Maryland ended Brown’s season by scoring in the final minute.

The Bears finished their season with a 13–3–3 overall record and a 4–1–2 Ivy League mark. “The season was great,” Laughlin says. “Winning the Ocean State Classic, winning the Husky Classic, and advancing in the NCAA tournament: it was an incredible journey.” 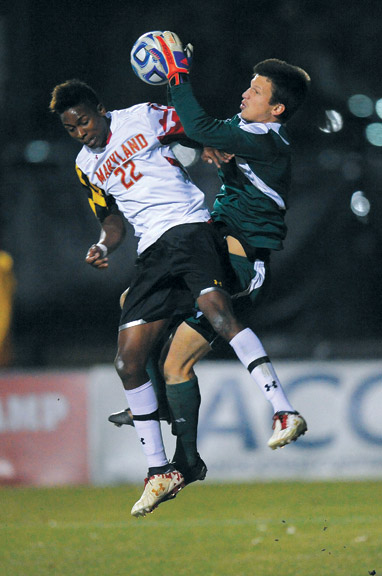 Courtesy Maryland Athletic Dept.
The Bears gave number two-seed Maryland a scare in the NCAA Tournement by taking an early lead in their second-round match.