On their first trip to North Korea in the summer of 2009, Nicholas Young ’09 and Matthew Reichel ’09 got the usual government-controlled tour of the country: children’s singing recitals, tours of mausoleums of deified leaders, and a seat at the Arirang Mass Games, an extravagant gymnastics celebration of North Korean’s history and progress under the Communist regime. The pair left hoping to find some way to probe deeper into North Korean society. 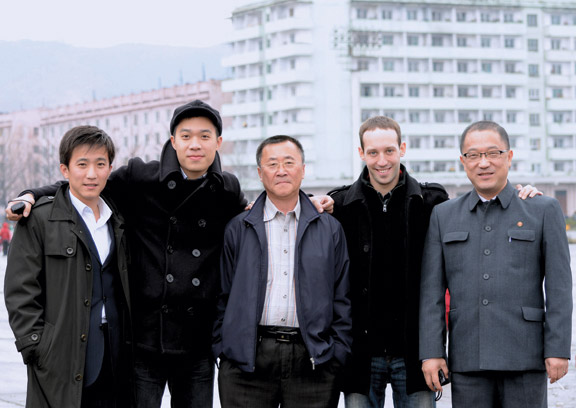 Courtesy Nick Young and Matt Reichel
In North Korea.
So they went home and made some phone calls, reaching out to several North Korean organizations and meeting with government ministers across the border in China. Engaging with North Korea was an idea inspired by Reichel’s senior project about Korean and Chinese family histories.

“It was just a personal fascination that became a passion,” he says.  Within months after graduating, he and Young started the Pyongyang Project, a Vancouver, Canada-based nonprofit aimed at promoting educational and cultural exchange between North Korea and the West. Young and Reichel currently work with six domestic agencies including the Pyongyang Technology Services Centre and the Korea International Youth and Children’s Travel Company. Operating in North Korea isn’t easy. “You don’t know what kind of surveillance goes on,” Young says. “You should only assume.”

To date, between them they’ve made roughly thirty visits to North Korea. The Pyongyang Project has arranged for several hundred international students to visit the country as well as some academics and business leaders. They study at Yanbian University in China, where they take a ten-week immersion course in the Pyongyang dialect of Korean and then go on several trips to North Korea.

“We want our students to leave with more questions than answers,” Reichel says. “The region is complicated, confusing, and there are no easy conclusions to draw.” In the classroom, students learn about North Korea’s relationships with China and the West, Reichel says.

Young and Reichel met at the start of freshman year while standing on line to take a proficiency exam in Chinese. Reichel attended a Beijing high school during a senior year abroad. “In front of me in line, here’s this white guy speaking fluent Chinese with a Beijing accent,” Young recalls. Their paths frequently overlapped after this. They were both double-concentrators in East Asian Studies and economics (Young) and international studies (Reichel). Together they helped organize the Strait Talk Symposium, a group that brought together mainland Chinese, Taiwanese, and Brown students for a discussion on conflict resolution.

Young and Reichel enjoy rare flexibility within North Korea because of their partnerships with domestic groups around the country. “We’re not going around the church circuit asking for handouts,” Reichel says. Although the Pyongyang Project operates on a shoestring budget, relying mostly on tuition from participants, it sponsored a North Korean student at Cambridge University last year. Future student exchanges are also planned.

Though some pundits believe North Korea’s new leader Kim Jong-un will bring reforms, Reichel remains skeptical. So he and Young are also not sitting around waiting for change to happen. “We push boundaries as much as we can and right now is a good time to push,” Reichel says. “This is a long-term play, a long-term investment for North Korea’s future.”