Who Wants to Party?

During his senior year, Alex Fitzgibbons ’94 was driving home from his twenty-first birthday dinner at the upscale Italian restaurant Al Forno, when he spotted the Lincoln Town Car used by Providence’s mayor, Vincent “Buddy” Cianci. Fitzgibbons pulled up next to Cianci, by then a convicted felon, and asked him if he wanted to come back to his apartment to party. Cianci, who loved mingling with constituents, agreed. 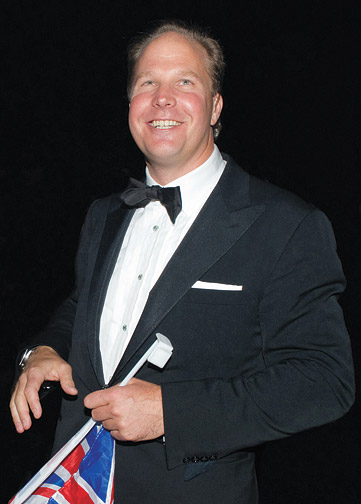 Courtesy Alex Fitzgibbons
Fitzgibbons arranges parties for royalty and society's elite.
It was an early taste of what it’s like to party with the rich and famous. As co-owner and managing director of Fait Accompli, a London-based international event-planning company, Fitzgibbons puts together multimillion-dollar fêtes for the world’s elite. “Most of our clients rely on our discretion, and these assignments are often highly confidential,” the company’s website states. “We pride ourselves on protecting the privacy of our clients.”

Nonetheless, the names of a few of Fait Accompli’s customers have leaked out over the years. In 2011, Fitzgibbons arranged the Buckingham Palace wedding after-party for Prince William and Princess Kate. He’s done state dinners for the Obamas in England when they hosted the queen. The London Evening Standard reported in 2011 that Fitzgibbons and his business partner, Camilla Monckton, “have long been firm favorites of the Royals and are the first port of call for Palace functions.” The paper also said Fait Accompli handled the wedding party for horse racing tycoon J.P. McManus’s daughter Sue in 2007, a 1,500-guest affair that the London Sunday Mirror described as “the most lavish wedding” Ireland had ever seen.

Fitzgibbons grew up in England and attended Eton College, a prestigious private school founded in 1440. His social life took off when he shared birthday parties with his twin sister. “That was a good thing when I was thirteen, fourteen, fifteen, and desperate to have girls there,” he says. He concentrated in political science and history at Brown then moved to Atlanta, where he was admitted to the bar—the kind, though, where they serve drinks. “My father said, ‘I can’t believe I paid for a Brown education and you’re a bartender,’” Fitzgibbons says.

After a stint in marketing, he started and then sold a food business. He joined Fait Accompli in 2002.

For Fitzgibbons, parties should be theater, not just a big bash. “You shouldn’t reveal your whole hand,” he says. “We plan parties in multiple acts, with something saved for later—a musical surprise or something hidden at the far end of the tent. An event should be like an Advent calendar, revealed piece by piece.”

Fait Accompli attends to all the details—monogrammed napkins, candelabras, tents glowing against a midnight sky—and over the years has brought in such celebrity entertainers as Rod Stewart and Diana Ross. Fitzgibbons says one reason he enjoys his work so much is, “I admire people who are happy to spend their money showing other people a good time.” He has also done extensive charity work and serves as a trustee for the Eve Appeal, which raises money for gynecological cancers. His mother-in-law died of ovarian cancer in 2006.

Fitzgibbons is married to Cristina Stenbeck, the chairwoman of the Swedish investment company Investment AB Kinnevik. As for their own party life, Fitzgibbons says that with three girls age four or younger, “For my wife and me, a night out on the town is very much the exception rather than the rule.”

Reader Responses to Who Wants to Party?