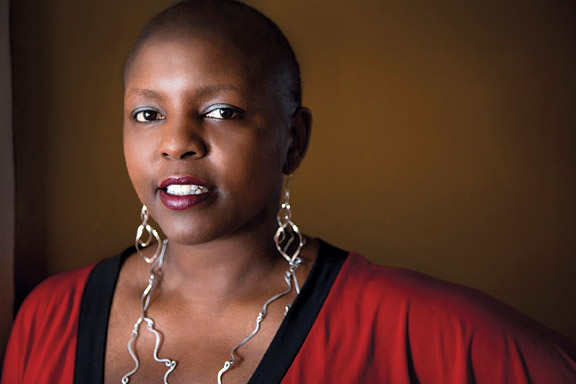 Courtesy Yoruba Richen
Richen probes the intersection of black and gay activism.
BAM In 2008 the Advocate declared “Gay Is the New Black.” How did that influence your film?
RICHEN That caused a lot of uproar in the African American community and the LGBT community. What the title came to mean is that “the new black” is also the new black activism and conversation that’s happening around the issue: young activists who are out on the streets and in their communities working to gain support not just for marriage equality but for LGBT rights in general. They’re the new black.

BAM What surprised you most making this film?
RICHEN How it’s generational. You look at President Obama. He talks about his evolution on the issue. He talks to his own daughters. [Young people] are pushing their parents, the people in their communities, their elders, their churches, to offer this expansion of civil rights.

BAM In the film, you interview a young black pastor fighting gay marriage. Did you sympathize with any of his views?
RICHEN No. But I also understand the argument about the family, and about our fragility in this country. We weren’t allowed to have families. That’s something that’s unique to black people, the history of how our families have been demeaned in this country. And so there’s a real fraught-ness around this notion of family. And we have to listen to that. But at the same time, [one of the commentators in the film, Bishop Yvette Flunder] said, “We’ve never had these Father Knows Best families. We’ve always had different ways of creating family.” So to reject that doesn’t make sense.

BAM So, is gay the new black? Is it fair to compare the two movements?
RICHEN “Gay is the new black” is not a phrase I ascribe to. The struggles are different. We have our own history as black people. We know our unique history of slavery and unpaid labor and of being disenfranchised in this country. But I do think there are similarities. President Obama said it at his inauguration, putting the gay rights struggle in the context of Selma and Seneca, that great American march towards fairness and equality. The way I look at it is that we are now seeing the struggles for gay rights as part of the American struggle to expand fairness and equality for all.