Amy Lo ’97 has a habit of looking up. A system engineer for Northrop Grumman in Redondo Beach, California, she has spent her career finding ways to help scientists peer into deep space in search of extraterrestrial life and solutions to all sorts of cosmic mysteries. A major obstacle is that billions of earth-like planets are so far away that their dim light is overwhelmed by the glare of nearby stars. “Extraterrestrial planet finding,” she explains, “is like looking for a firefly next to the lighthouse.” 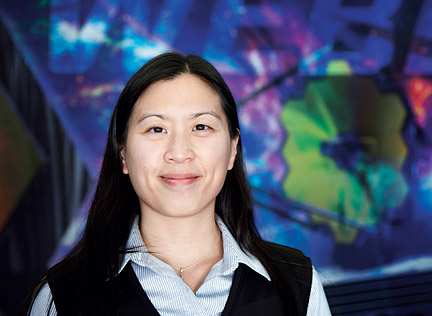 Lo, who two years ago was named an Asian American Engineer of the Year by the National Engineers Week Foundation, was on the team that developed the fifty-yard-wide daisy-shaped “sunshade” that will be central to NASA’s $3 billion New Worlds Observer mission, which the agency hopes to launch into orbit a million miles away from Earth later this decade. The device’s plastic “petals” will block enough light to enable a telescope trailing thousands of miles behind it to pick up unprecedented detail from distant planets. A particular challenge for Lo and her colleagues was getting right the number and arrangement of the petals. “You make too many petals and you have too much structure,” Lo says. “You make too few and it doesn’t work. We’d get together on the weekend and keep talking about it.”

Last summer, Lo transferred to a new project at her company, the construction of the James Webb Space Telescope, the most powerful telescope ever built. The successor to the Hubble Space Telescope, it will search for the origins of the universe; its launch is scheduled for 2018. As a lead designer, Lo is trying to figure out how to assemble the Webb, which has a mirror more than twenty-one feet wide and a sunshield bigger than a tennis court. “I like coming up with a plan to build a Lego, rather than using someone else’s directions for Legos,” Lo says of her approach.

Lo was born in Taiwan and moved to California with her family when she was twelve. They moved around often as her dad made forays into the restaurant and orchard businesses. At Brown, she majored in physics. When for an astronomy class she set up a telescope on Wriston Quad with her classmates on clear nights, other students would join in, and the outings turned into al fresco social events. After earning an astrophysics doctorate from UCLA, Lo went to work for Northrop Grumman in 2005.

In her downtime, Lo, her husband, and a group of friends race junk cars. Teams compete to see who can cover the most miles, racing clunkers that cost no more than $500 to purchase and repair. The series is called 24 Hours of LeMons, a cross between “lemon” and the more prestigious 24 Hours of Le Mans car race in France. Over the last few years the sport has taken Lo and her buddies to races in California and other parts of the Southwest. Their best finish was sixth out of 100 cars.

Lo operates the radio, passing along helpful information to the team member behind the wheel of their vehicle, a 1974 Lotus Elite. “I did have the dubious distinction of telling one of our drivers that he was on fire,” Lo says. “He thought I was telling him that he was really fast.”

Reader Responses to Firefly and Lighthouse