Robert Rutherford ’05 was climbing the movie-biz ladder in Los Angeles when a phone call changed his life. It was 2009, and his parents called to say, “Happy Birthday. And we’re bankrupt.” 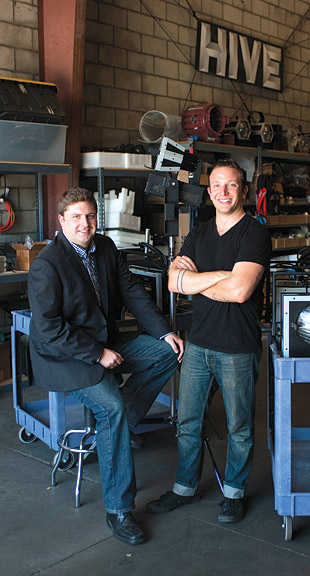 Rutherford quit his job assessing film projects for a finance company and moved north to help his architect father and stepmother start a lighting-installation business. He had no way to know how valuable the experience would be. He learned what it takes to get a start-up off the ground and became a self-taught expert in cutting-edge lighting technologies.

Meanwhile, Jonathan Miller ’05, Rutherford’s former collaborator on the annual Ivy Film Festival at Brown, was working as a director of photography on TV commercials and music videos and was frustrated by having to use generators to power his lights. “I was always trying to figure out something where I could just plug it into a wall and get a good-looking light out of it,” Miller says.

Rutherford found the answer three years ago at a lighting trade show, where he discovered a plasma fixture that produced flicker-free light while also consuming 50 to 90 percent less energy than conventional tungsten bulbs. He immediately contacted Miller.

“We get this starter kit into my living room,” Miller recalls, “and plug the light bulb into the wall and turn it on, and the light’s beautiful! It was the best artificial daylight I’d ever seen. I go, ‘This is something everyone should be using on movie sets.’”

Amazingly, directors of photography for film and TV had ignored the potential of plasma lighting. So Rutherford and Miller started Hive Lighting. Fabricating their first prototypes by hand, they partnered with an industry veteran, Jaime Emmanuelli, and landed a high-profile early adapter in filmmaker Joss Whedon (Buffy the Vampire Slayer, The Avengers). He plugged Hive Lighting fixtures directly into the wall sockets of his Los Angeles house, which he used as the setting for his adaptation of Much Ado About Nothing. Since then, Hive lamps have illuminated TV commercials, industrial shoots, and television series, including CSI and Parenthood.

When pitching plasma to Hollywood cinematographers, Rutherford and Miller say they stress its practical benefits—not its carbon footprint. “That’s too abstract to move the needle for most customers,” Miller says. “So we talk about the color quality and the fact that plasma is flicker-free and less expensive to operate. The priority for us was to make a better movie light.”