Here’s a  piece of trivia to trot out while the Brown Band races around the football field at halftime: Those Brown Bear Nuts the concession stand has been selling forever, the ones whose shells you’re crunching underfoot? Well, the Providence company that roasts those nuts just turned 100. 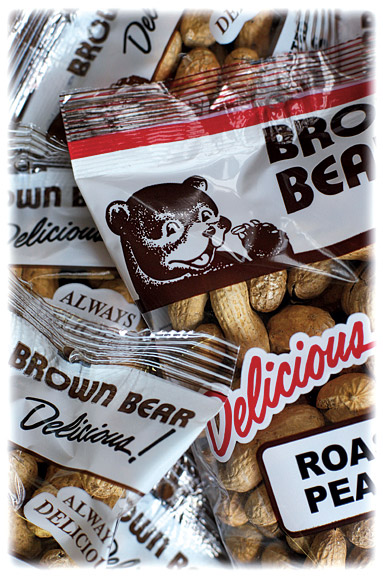 Congrats to the Virginia and Spanish Peanut Company (it’s named for the two peanut varieties, not the locations), which celebrated its centenary just in time for National Peanut Day, September 13.

Armenian immigrant Peter S. Kaloostian founded the roasting company in 1913, and five generations of Kaloostians have kept it going ever since. One of the current owners, Candace (Candy) Kaloostian, says her grandfather Leon did the original pen-and-ink drawings for the label.

“My grandfather wanted to be an artist, but his father started the company and needed him to help out,” Candy says. The family began selling their Anchor Brand nuts in 1916, and Candy figures that Bear Nuts came out sometime during the 1920s.

This July, Rhode Island Lieutenant Governor Elizabeth Roberts ’78 hosted a birthday bash at the State House for the Virginia and Spanish Peanut Company, presenting certificates of recognition and achievement to the Kaloostian family.

No crunching was heard.