Ask Scott “Woody” Woodworth ’82 how he came to outfit Sochi’s Norwegian Olympic curling team in their snazzy pants, at right, and he’ll start at the beginning. At Brown. 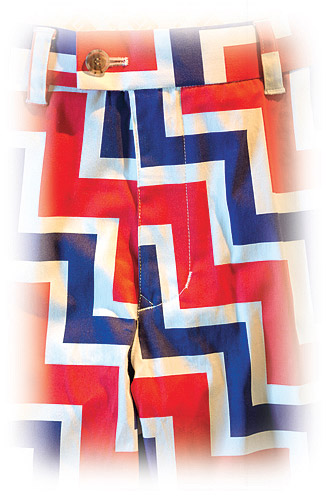 Freshman year, a friend took him golfing. “He came to pick me up wearing knickers and a Tam o’Shanter,” Woodworth recalls. “I thought, ‘He’s gonna have fun!’”A stylin’ guy himself,  Woodworth says he’d show up at parties in powder-blue velour bell-bottoms and a disco shirt with Mickey Mouse on the back. Unsurprisingly, he became a graphic designer.

Fast forward to 2000, when he was shopping for golf pants. “I didn’t find anything suitable,” he grouses. “I couldn’t even find white pants.” So he and a partner founded Loudmouth Golf, which makes pants, skorts, board shorts—you name it—in such unsubtle patterns as paint-ball spatters and oversized paisleys and argyles.

In 2010, just six weeks before the Vancouver Olympics, one of the men on the Norwegian curling team was dismayed by their boring black pants. “So he typed ‘colorful pants’ into Google and found us,” Woodworth says. The pants were an international sensation. “We had a huge spike in sales,” Woodworth says.

For the 2014 Winter Olympics, the Norwegian curlers debuted custom uniforms in several Loudmouth prints—all in the Norwegian flag’s red, white, and blue.