The 250th-anniversary weekend not only looked back at Brown’s history; it also looked ahead at the changes most likely to transform education in the future. For educator Norman Atkins ’84, for example, there’s no doubt that technology will revolutionize the classroom. “Yes, the lecture is dead,” he said. “Rest in peace.” 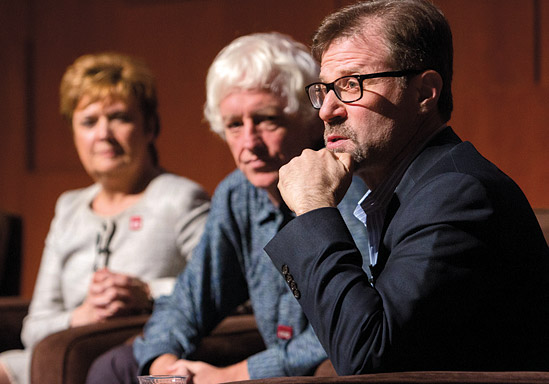 Scott Kingsley
The lecture is dead, says Norman Atkins '84, president of the Relay Graduate School of Education, as Mount Holyoke president Lynn Pasquerella '85 PhD and Google research director Peter Norvig '78 look on.
Atkins, the president of the Relay Graduate School of Education, a New York City teacher-training program for charter schools, spoke during the 250th weekend as part of a panel entitled, “ABCs, Bits, Bytes, and MP3s: Technology and Its Impact on a Liberal Education.” He sketched a future in which students take Massive Open Online Courses (MOOCs) as prerequisites for classes offered on college campuses. “They will be replacing textbooks and lectures and other experiences that are not nearly as effective,” he said.

He also predicted the widespread use of “virtual seminars,” in which groups of students from around the world take classes together online with professors. Through the use of interactive technologies such as 3D goggles, “you will feel like you are virtually in the seminar room,” he said.

Peter Norvig ’78, director of research at Google, recently cotaught a MOOC on artificial intelligence for 160,000 students in 190 countries. Instead of long lectures, the course used targeted videos and assignments in which “everything was focused around the student accomplishing something.”

Each student received the instruction he or she needed to move to the next level of comprehension, a far more personalized approach, Norvig said, than giving the same lecture to everyone regardless of skill level. He believes the MOOC approach “is much more two-way. We’re having more interaction back and forth.” He said it also transforms a passive educational experience, in which you’re listening to a lecture, into an active one, where you’re selecting the assignments and videos you need in order to learn. Students learn more, Norvig emphasized, when they are able to move at their own pace.

Technology also allows Norvig to track students’ progress more closely than in a conventional course. He can, for example, monitor how long they spend on an assignment, and, by analyzing their aggregate performance on assignments, he can see where students are struggling the most—an approach that is more efficient than waiting for the results of a midterm or a final.

None of the panelists went so far as to call for the end of live interaction on a campus. There’s no substitute for face-to-face discussion with other students and professors, they agreed. In addition, going to an actual school enables you to join communities and meet people from different backgrounds. Showing up at a professor’s office hours or going to lunch together offers greater intimacy and impact than an online course.

“The learning doesn’t stop when you leave the laboratory or the classroom,” said Lynn Pasquerella ’85 PhD, president of Mt. Holyoke College. “It continues in the residence halls, when you’re out on the quad. It infuses every aspect of a student’s life.”

Reader Responses to A Virtual Education