Grab the Arc of History

“I want you to remember how you feel at this very moment in your life—passionate, driven, wanting to change the world,” World Bank president Jim Yong Kim ’82 told an overflow audience in a keynote speech kicking off Brown’s 250th anniversary celebrations March 7. “When Dr. King talked about bending the arc of history,” Kim said, “he didn’t mean that we should be spectators who stand by and watch history unfold. He showed us through his own life that all of us must do our part to grab the arc of history and bend it toward justice with everything we have. 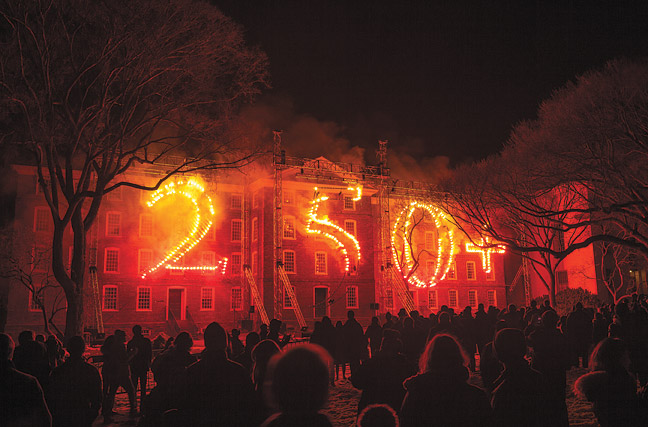 Scott Kingsley
Fireworks light up the facade of University Hall.
Kim has bent the arc of history toward justice repeatedly. An MD with a PhD in anthropology, he has taken on the globe’s most challenging diseases: he cofounded Partners in Health to combat AIDS in Haiti, he persuaded the international community to treat drug-resistant TB, and he led the World Health Organization’s drive to curb the spread of AIDS. Before taking the World Bank’s helm in 2012, he was president of Dartmouth. In urging his Brown listeners to grab the arc of history, Kim sounded a refrain that echoed over and over on March 7 and 8, as Brown launched a fifteen-month celebration that will culminate with Commencement in 2015.

President Christina Paxson had hit the same chord earlier that morning when she greeted more than 250 Rhode Island seventh- and eighth-graders, who had been selected to spend a day at Brown. (The only guideline Brown gave the schools was to send students who were unlikely to get a chance to visit the campus on their own.) After a video on Brown’s history, the spoken-word group WORD! performed a poem they had written for the anniversary. It concluded:

This history is a history of you
The dreamers,
the makers,
the builders of today and tomorrow
You are one… in a world of creators
What will you create?

“You are making history!” Paxson told her bright-eyed audience. Then she sent them off to dig for potshards, to fly drones, to fertilize sea urchin eggs, to check out the medical school, and to watch a lion dance. “Have fun!” she instructed. “I hope to see some of you back at Brown as students.”

There was something for everyone at the two-day kickoff. Friday evening, crowds poured into Sayles Hall (“I hear there’s food in here!” students said, bounding up the stairs with their uncanny radar for comestibles) to see a documentary history of Brown produced by former trustee Betsy West ’73 (producer of the documentary series Makers) and her husband, documentarian and playwright Oren Jacoby ’77 (Constantine’s Sword, Sister Rose’s Passion).

About 5,000 people visited the campus over the two days, roaming happily in warm weather that melted much of the snow on the College Green. The cerebrally inclined thronged into lecture halls where Kim and labor secretary Thomas Perez ’83 gave keynotes. A series of panels addressed various arenas for shaping history: they debated the impact of technology on teaching and argued about revolution; four governors (three of them alums) discussed the polarization of U.S. politics; and filmmakers talked about creating change through documentaries.

Parents of small children (and those tired of sitting) took campus tours and dropped in on the dozens of performances and exhibitions being held across campus. “I hugged a robot,” boasted one kindergartener from Vartan Gregorian Elementary School. “I touched the moon,” proclaimed his classmate.

The Bell Gallery exhibited drawings, video, and sculpture by three prominent alumni artists—Dawn Clements ’86, Kerry Tribe ’97, and Paul Ramirez Jonas ’87, whose massive cork reproduction of Marcus Aurelius—it’s called “The Commons”—lived up to its name, inviting throngs of visitors to gather and to post messages on its cork pedestal.

Up in Lyman Hall, dancers of all ages had the opportunity to learn from the masters. The Mark Morris Group was on campus with former member David Leventhal ’95, who led master classes with Morris and other dancers, and the company performed at the Veterans Memorial Auditorium Saturday night.

In the Granoff Center was still more art, much of it multimedia. Toddlers were mesmerized by an installation in which Michelle Higa Fox ’04 had filled a shallow wooden frame with sand on which she projected a video of waves lapping at the shore. “It changes with the tide,” she explained to grownups, as a small boy took a more elemental approach, tracing the moving water with his fingers.

In the Sidney Frank Hall for Life Sciences, students and professors enthusiastically told visitors about their progress helping paralyzed men and women with a brain implant that prompts a robotic arm to execute mental commands. The researchers’ passion was plain to see in the tireless attention they gave each question as they stood by computers showing graphics of brain activity and a video of a patient picking up a cup using a brain-powered robotic arm.

Saturday night the Brown Wind Symphony debuted a birthday song, commissioned by Edward Guiliano ’72, who’d been president of the Brown Band and had founded the Wind Symphony as a student. Composer Patrick Zimmerli wove Caribbean and other melodies into a jazz piece he named “Brownian Motion.” Throughout it, Brunonians recognized a familiar melody, “Araby’s Daughter,” as the tune to the Alma Mater.

By all accounts, the weekend’s highlight was the cake (the cake heard ’round the world via Instagram, Twitter, and Facebook). Weighing in at about 650 pounds, the layer cake was made of chocolate and red velvet (Brown’s colors, after all)—in the image of University Hall, complete with cupola, sponge-painted brickwork, and even finely wrought Van Wickle Gates.

After the enormous confection arrived by van Friday afternoon, a small crowd watched the bakers assemble a platform on the porch of Faunce House. Then came the moment of truth as a team hoisted the cake up the steps to gasps and applause. By the time President Paxson and dignitaries arrived to deliver birthday toasts to Brown, even the snowy patches on the Green were packed with people. “It’s like Campus Dance,” exclaimed Clare Hare ’81.

Just then, the sound of fireworks drew people’s attention to a line of fiery white geysers erupting on the roof of University Hall. As the sky lit up over Providence, flares on a scaffold in front of the building spelled out “250+”. In the thickening smoke, it was easy to imagine cannon fire greeting George Washington as he sailed up Narragansett Bay from Newport to visit the College in 1790. In that magical moment, the arc of Brown’s history felt palpable, and its future seemed thrilling.

Reader Responses to Grab the Arc of History