Cooking with Fire: From Roasting on a Spit to Baking in a Tannur, Rediscovered Techniques and Recipes that Capture the Flavors of Wood-Fired Cooking by Paula Marcoux ’82 (Storey Publishing). 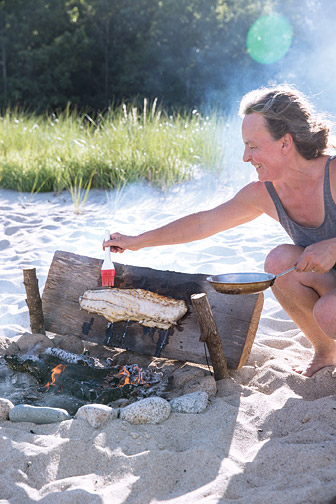 Keller + Keller
Paula Marcoux ’82 takes outdoor cooking to a whole other level.
Spend an hour or two at Paula Marcoux’s Plymouth, Massachusetts, homestead—off a dirt road that’s off a dirt road—and you’re likely to come away convinced that it’s a good idea to build a wood-fired oven in your backyard. Scattered around the lakeside property are half a dozen or more homemade cooking devices, among them fire pits, mud-covered ovens, tannurs (bread ovens of Middle Eastern origin), and cloams (masonry ovens originally found in England), along with cooking implements, tables, trestles, numerous chairs, and various other bits and bobs. It’s a little Middle-Earth-meets-Appalachia, but the whole spread serves as a sort of laboratory for Marcoux’s serious work studying the food ways and cooking techniques of earlier eras.

Even as a child, Marcoux ’82 was fascinated by history, and she went to Brown to study with James Deetz, who’s sometimes called the father of historical archaeology. Though Deetz left Brown just before Marcoux arrived, she stuck with the discipline, spending her junior year doing fieldwork in Israel. But she never saw herself pursuing academic archaeology, and after graduation she worked in restaurants. Eventually, she became a curator and historic interpreter at Plimoth Plantation.

“I’d always loved to cook,” she says, “and as an archaeology major it bothered me that those two things—cooking and archaeology—were so separate. No one in archaeology was looking into how people baked in seventeenth-century New England.” So cooking, baking, and the construction of historically accurate wood-fired ovens became her specialties.

After more than twenty years, Marcoux left Plimoth in 2008, and now she’s written a fascinating cookbook that’s part recipe collection, part instruction manual. It’s elemental stuff, about as far from the twee and trendy as possible, and many of the recipes are rooted in history or ancient cultures. But who could resist such earthy fare as spit-roasted stuffed striped bass, salt-roasted shrimp, or clay-pot vegetables?

Some of her instructions may seem daunting—Marcoux fills eleven pages detailing the construction of a basic wood-fired oven, for example. But many of the techniques are more accessible, and Marcoux has both a can-do attitude and the highly competent person’s knack for making it all look easy.

There’s no arguing with the results. On a chilly day in late winter, she fired up a simple version of a tannur—which has been in use since ancient times—constructed from a piece of twelve-inch steel pipe set on bricks and fueled from below. Perched atop it was a convex piece of salvaged metal (an inverted wok will also do), and on this blisteringly hot surface she slapped rounds of yeast dough, stretched out by hand to near-transparent thinness, to make shrak, a kind of Palestinian flatbread. The bread’s chewy, crunchy, and charred bits were all tantalizingly infused with smoke. Nothing could have been simpler or more delicious.

“I’m not a romantic about this,” Marcoux says, “but there’s something magical and weird about it. Everything cooked with fire tastes good.”

Reader Responses to Playing with Fire