In 2008, Representative Arthur Handy introduced legislation in the Rhode Island state legislature to cut the state’s greenhouse gas emissions. After it failed to pass, he resubmitted it. Year after year he introduced the bill, and year after year it was voted down. 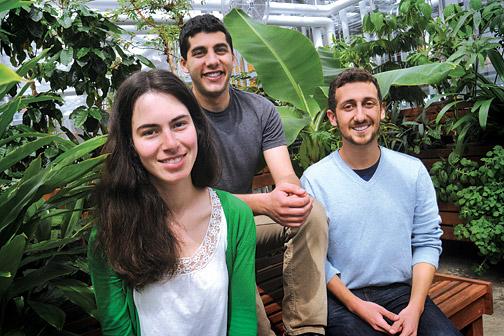 Frank Mullin
Mara Freilich '15, David Chodakewitz '15, and Cory Zeger '14 lobbied to get a climate bill through the Rhode Island state legislature.
Now there’s reason for optimism. Handy’s legislation has received strong support from the Rhode Island Student Climate Coalition (RISCC), which is made up of college students, most of them from Brown. The RISCC approached Handy in the fall, offering to help spread the word and organize support for the bill.

One reason Brown students stepped up this year was President Christina Paxson’s call last October for “significant and impactful initiatives to position the University as a leader in combating climate change locally, nationally, and around the globe,” which formed part of her letter explaining the rationale for Brown’s decision not to divest from companies involved in the coal industry.

Handy and the students thought more legislators might sign on to a climate change bill if it provided protection for their districts from the effects of global warming. Handy altered his proposed legislation not only to reduce carbon dioxide emissions, but also to offer communities help dealing with the effects of climate change, evidenced, according to Handy and the students, by the recent increase in severe storms and flooding in Rhode Island.

The bill calls for protecting natural areas and updating building code standards. At the same time, it calls for the state to decrease its CO2 emissions by 85 percent from 1990 levels before the year 2050. “It’s for Rhode Island. It’s for the communities,” says organizer Cody Zeger ’14. “It’s for the people living here who will be affected in the future.”

RISCC member Mara Freilich ’15 said she and the other students focused mainly on providing research and building support for Handy’s measure in local communities. They pitched the legislation as a way to create new Rhode Island jobs in green energy as well as a way to protect the environment.

“We want to rebrand Rhode Island as a green-friendly state where environmental industries will want to go,” says activist David Chodakewitz ’15.

As of April 29, it was still unclear if the legislation would pass. “If it doesn’t,” says Freilich, “we’re going to keep going forward next year. We’ll be pushing harder.”