When Jim Yong Kim ’82 flew back to his home state of Iowa in the middle of his sophomore year, he was set on becoming a political science major. “I think I could make a real difference in the world of politics,” he told his father on the car ride from the airport. His father, a South Korean immigrant and dentist, pulled the car over and the two sat in silence for a moment. “You know, Jim,” his father said, “after you finish your medical training, you can do anything you want.” 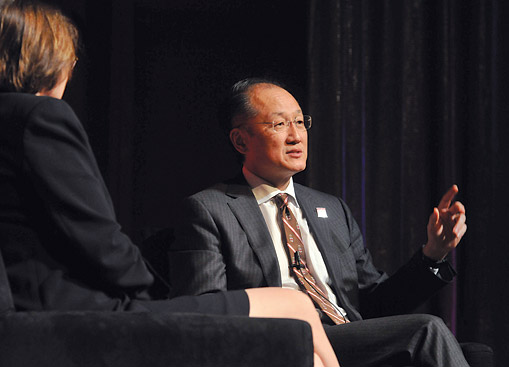 Frank Mullin
Don't just watch it unfold, World Bank president Jim Yong Kim "82 urges students in his keynote speech.
Kim’s father won the first round. Kim attended Harvard Medical School, but, in the years since he earned his medical degree, he’s combined doctoring with politics and a commitment to social justice. It was his mother, Kim said, who told him about the civil rights movement and about Martin Luther King Jr.’s famous line, “The arc of the moral universe is long, but it bends toward justice.” King, he said, “didn’t mean we should be spectators and stand by and watch history move forward. All of us must do our part to grab the arc of history and bend it toward justice.”

Kim began his career in global public health as a medical resident in 1987, when he cofounded Partners In Health, setting up health care programs in Haiti. He left in 2003 to join the World Health Organization, and a year later headed its HIV/AIDS department. Between 2009 and 2012, he served as president of Dartmouth.

He arrived at the World Bank at a critical moment, with its historical domination by the United States under attack, the global economy struggling, and many people questioning whether the aid agency had outlived its use. After World Bank employees in a survey reported a “culture of fear,” pervasive “fear of risk,” and a “terrible” environment for cooperation, Kim ordered a major overhaul of the bureaucracy. The agency lends more than $30 billion a year.

Unlike many past World Bank presidents, Kim’s background is in health, not economics. In his speech he said the agency is now focused on two core objectives—ending extreme poverty by 2030 and boosting prosperity for the bottom 40 percent of the population in developing countries. Other goals, he said, include slowing climate change and getting countries to invest more in public health.

Given the World Bank’s emphasis on the environment, Kim inevitably found himself being asked by students about the University’s decision in October not to divest from companies involved in the coal industry. He declined to give his opinion, but said that with many low-income countries dependent on coal for energy, “there are just an extremely large number of questions that are very complicated.” He echoed comments made by President Christina Paxson in the past that Brown could best serve the cause of environmentalism through scientific research.

Kim’s speech, a Stephen A. Ogden Jr. ’60 Memorial Lecture on International Affairs, at times sounded like a commencement address. “Please go change the world,” he told students. “If you are here today and if you graduate from Brown, you are ready to tackle just about anything.”

Reader Responses to Toward Justice