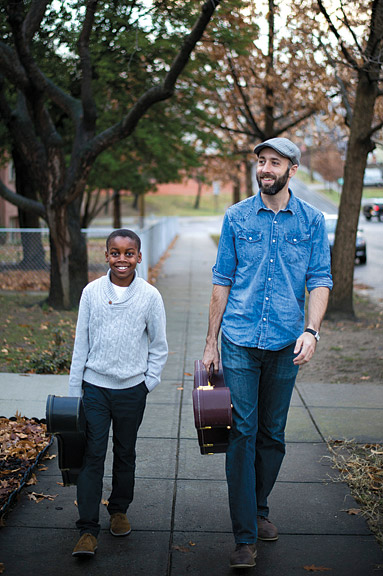 Maria Bryk
Nick Bayard totes his guitar alongside his adopted son, the pancake-loving Ukweli, who inspired all the songs on one of Bayard's two new CDs, Wishing Well.

On his website Nick Bayard ’04 describes himself as a writer, guitarist, singer, artist—and political economist. What? “I’ve been trying very hard to not pigeonhole myself,” Bayard says. Indeed. He spent three years as a Peace Corps volunteer in Paraguay, taught environmental science in Wyoming, worked as an administrator at a D.C. charter school, and earned a master’s in public administration and international development from Harvard’s Kennedy School of Government.

But right now Bayard is making music. Lots of it. “I’ve been playing music for my whole adult life, but mainly on the side,” he says. “Never before have I had projects that felt like they required my full-time attention.” In February he released two folk and bluegrass records—one for adults and one for kids—with a bright, brassy sound, sweet melodies, and a whimsical sense of history and humor. Both were inspired after he fell in love with his now-wife, Sedia, and her eleven-year-old son, Ukweli.

Memento begins with a Hank Williams–style lament called “Sad and Blue.” From there the record—like Bayard’s life since he and Sedia met at the Kennedy School—gets increasingly foot-tappingly hopeful: an upbeat railroad yodel, “Make It If I Try,” is followed by the record’s title track, a bittersweet acceptance of time’s passage: “Though you will not be allowed to take a memento,” he sings, with Sedia adding lovely harmony, “this world ain’t so troubled if you look at it right.” The record ends with “Silver,” a love song with which he proposed to Sedia. Bayard’s sound is clear and clean. It’s wholly acoustic, with just a handful of instruments—guitar, banjo, mandolin, and bass—telling the story of Bayard’s new family using the musical language of vintage Americana.

The music on the children’s CD, Wishing Well, is as sophisticated as Memento’s with lyrics that are just as wise. What makes it a children’s album is its subject matter and its lighthearted sense of fun. “Kids are a lot smarter than we give them credit for,” Bayard says. Ukweli, who sings and plays on many of the tracks, inspired all of them. The album is stacked with a paean to pancakes (Ukweli’s favorite food), a sweet reminiscence about a beloved red wagon, and a cautionary tale about things you can’t learn on the Internet (“Can you learn how to borrow and lend? / Can you learn how to make a best friend?”). When Bayard first met Ukweli, the boy had studied piano but had not played much guitar. Bayard taught him some basics, and within three weeks Ukweli was playing rhythm guitar and singing harmony.
“I was blown away by how fast he learned,” Bayard says. The two began playing outside their house in Washington, D.C., and “kids would flock,” he says, singing along and requesting songs. Soon Bayard and Ukweli were playing weekly concerts at a local farmer’s market, at schools where Bayard used to teach, and at a kids’ concert series.

This summer the family moved to Sedia’s native Pacific Northwest, where the couple plans to found a school or an international development agency, while Bayard keeps writing and playing music. Engaging all of his interests is a skill he learned at Brown.

“One of the very special things about Brown is, it allows you to be your full self as a student and as a person,” he says. “I was able to be on the crew team and organize a concert and be in a band and study the environment. If it hadn’t been for Brown, I would have ended up on much more of a single track.” Memento and Wishing Well are a twenty-five-track testament to that.