William Bostwick ’07 on Prohibition, agriculture, innovation, and the relationship betweenbeer and writing. 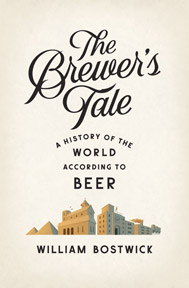 BAM To what extent do you owe your love of craft beer to your time at Brown?
WB My first taste of craft beer came at Brown. I had arranged a big ski trip to Vermont and was given a six-pack of my choice as thanks. I remember thinking my beer knowledge was gleaned from my parents—and they drank Rolling Rock. My friend said, “Pick something good,” but I didn’t know good beer. I think it was Dale’s Pale Ale from Oskar Blues in Oregon, what we would think of now as a super-hoppy, super-citrusy IPA. It was my first experience of what beer could be. Also, at Brown I’d studied Early American Literature, so when I started home brewing I experimented with colonial American recipes.

BAM What inspired you to write about the history of beer in The Brewer’s Tale?
WB As I started digging in the historical record for inspiration for home brewing old recipes, I saw the deep, rich history of beer in society. It was my realization that beer, even in the recent past, was really a cornerstone, of not just social life. It was religious. It was medicinal. There is a way of organizing the world—of telling our story—that beer can tell.

BAM As a beer writer, brewer, and connoisseur, what did you learn about the history of beer that surprised you?
WB The most interesting thing was the connection between beer and agriculture, between beer and gardening. We think of beer as an industrial product, and in a lot of ways it is. Through the need to make it on a large scale we have massive breweries. But beer for much of history was a homegrown event. Houses in Mesopotamia had a brew pot in the corner of the house. It was like the Italian family with the simmering pot of tomato sauce on top of the stove. That was beer.

BAM Your book suggests that America is the center of beer innovation right now. Why is that?
WB It’s interesting, you can kind of blame and credit Prohibition. In America, we had a rich homegrown beer tradition, beginning with the settlers and with colonial America. We couldn’t afford to import British beer, and certain ingredients we were used to having we didn’t have in America, so we had to invent our own beer tradition. Prohibition and the emerging American macro beer conglomerates forced smaller brewers to have the same kind of reinvention in the ’60s and ’70s and early ’80s.

BAM In addition to writing about beer, you’re also a brewmaster. Tell me about that and how it influences your writing.
WB It’s a little brewery called Woods Beer. Woods is run by a friend in the old Mission District [of San Francisco], and they’re opening another one, and I’m a brewer there. Making any kind of thing changes your relationship to it. After spending my day in front of a keyboard, I’m making something, and serving it, and talking about it. There is romance, and a real tangible mental security to brewing professionally. But part of what you learn about the craft is how hard and stressful it is.