The Brown family is laughing harder now that one of our own, Tracee Ellis Ross ’94, has landed another role on prime-time television. Some of you might remember her beloved eight seasons in the leading role as Joan on Girlfriends. Well, Ross’s signature style is back. To her new TV family on ABC’s black-ish, Ross brings her uncanny ability to calibrate humor from gentle comedic nuance all the way to its physical extremes, proving once again that she is a leading comic actress of her generation. 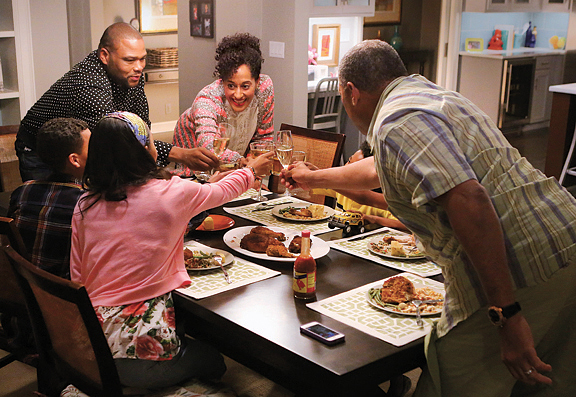 Adam Taylor/ABC
Dinnertime in the Johnson household, Tracee Ellis Ross '94 (center).
black-ish is a challenging sitcom that features Ross as a superwoman—anesthesiologist, wife, and mom to four children—in an upper-middle-class black Los Angeles family. The Johnsons struggle with what it means to “integrate” into a predominantly white professional and social environment while remaining connected to black culture. Ross, along with her TV husband, Dre (played by Anthony Anderson from Law & Order), humorously demonstrates how privileged black families might negotiate a world where black points of view collide with commonly distorted expectations and images about black people—a collision that produces strange racial contradictions and tensions.

For example, in the opening episode Dre has gotten a long overdue promotion but is surprised to learn that he is slated to run the “urban” division of the advertising agency. Although he gets on well with his colleagues, he laments just how often his white male coworkers insist on calling him “bro” and asking him if he knows Jay-Z.

A continuing strength of the series is Dre’s struggle with how to pass on black cultural traditions, idioms, and styles to his kids, who live in a largely elite, so-called “color-blind” but overwhelmingly white social world. Animating the show is the idea that black kids raised in all-white surroundings in the “post-race” era share a different (elders might say diluted) generational perspective on black identity than that of their parents and grandparents. So the “ish” in black-ish is both a play on what it means to “be black” today—“black” as it once was or just sort of “black-ish”?—as well as a clever reference to ish, which is slang for stuff. This show is about the, shall we say in polite company, “stuff” black people go through.

Ross’s character adds a different dimension to this generational friction by expressing less angst about the boundaries of black identity than her husband while remaining closely aligned with his generational experiences and parental worries. Her comedic instincts are pivotal to the arc of the show, whether that means bringing the energy of her husband’s exaggerated antics inward at surprising moments or pushing a scene’s limits Lucille Ball–style, using her formidable talent as a physical comedian to capture the outer-edge absurdity of a situation. In these more hilariously exaggerated scenes, Ross finds a way to push the limits without pandering to the racial stereotyping so often found in popular culture; she avoids both portrait and caricature.

Her gifts are central to the fine line the show walks. black-ish aims to show us how much the insoluble paradox of race shapes all our lives, and yet how much we share across ethnic and racial identities. It challenges us by centering the lives of black people in a way that simultaneously teaches us about black life and about us all.

Tricia Rose is a professor of Africana Studies at Brown and director of the Center for the Study of Race and Ethnicity in America.