How do you teach seventh grade girls about negative numbers? 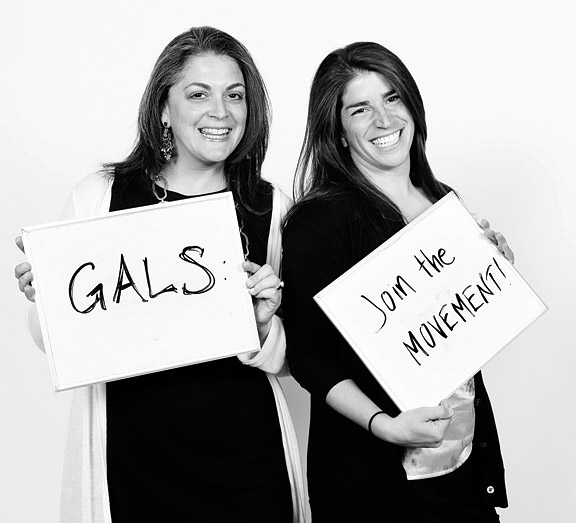 At the Girls Athletic Leadership School of Denver (GALS), a middle school founded by Nina Safane ’09 and Liz Wolfson ’89, teachers do it on a football field. Every ten-yard line becomes an integer starting at −5 at the goal line and 5 at the other. The girls are told to run to −3. Then they are told to run forward five. A fifty-yard sprint later, they find themselves at the number two, and the formula they’ve run becomes clear: −3+ 5=2. “It’s an understanding that can be felt,” Safane says.

Safane and Wolfson founded GALS in 2009 with the aim of integrating physical movement into every aspect of the curriculum. “We believe that leadership stems from owning who you are,” Wolfson says, “and that means physically as well as academically.”

The idea for GALS came to Wolfson when an acquaintance lent her two books, Rachel Simmons’s Odd Girl Out and Diana Meehan’s Learning Like a Girl. Both books made the case for the vast benefits of single-gender education for girls. When she read them, Wolfson says, “My heart kind of jumped out of my body.” Having played field hockey at Brown, she also felt athletics could be a powerful way to cultivate a sense of self-worth in girls.

At GALS, girls start their school day with what Safane describes as “a rigorous movement program” lasting forty minutes. The program changes each quarter, from running to yoga to circuit training and, finally, team sports. The GALS dress code requires black skirts or yoga pants, and staff as well as students wear athletic shoes of any color. “The kids and teachers have to be able to run a mile or do yoga at any given time,” Wolfson says. The school includes 275 students in grades six through nine.

The women met when Safane’s rugby coach called Wolfson to say, “Liz, I have a student for you.” The two women soon discovered that they shared similar backgrounds. Both grew up Jewish in New Jersey, and both attended public high schools and were athletes at Brown. “We’ve been called identical twins, sisters, mother-daughter, whatever you can think of,” Wolfson says.

Safane saw GALS as an opportunity to bring all her passions together. “I realized that all the things that I cared about in the world—gender studies, sports, health and wellness, and providing equitable access to education—could live in one school,” she says. “And not only could that school exist, but I could help make it exist.”

When GALS opened, Wolfson had never worked in a school before, and Safane was still in her junior year at Brown. But they have made it work. While still finishing up her bachelor's degree, Nina worked from Rhode Island on the school’s launch in Colorado. Initially, Safane wanted a school for low-income girls in the Denver area, while Wolfson envisioned a small, private independent school open to all girls, with the poorest given scholarships. They compromised. Today, 57 percent of the school’s students come from low-income backgrounds.

Encouraged by their success, Wolfson and Safane are expanding GALS. In 2016, they plan to create two more schools: a middle school for boys in Denver and another for girls in Los Angeles.
Wolfson says, “What we need to teach students is this: Take up the space that you want in the world, because it’s yours. Do not let the world tell you otherwise. Whatever personal story it is that walks you through these doors, it is yours, it gives you power.”