It’s often said that new englanders never voluntarily stray far from home. Take Walter Paster ’50. After he grew up in Abington, Massachusetts, World War II called Paster away. But after he joined the U.S. Army, which took him all over Europe, he returned to Abington to work in the school system for the next thirty-five years. By now he’s so ingrained in the town’s life that you can see him every Thursday at a local coffee shop with his ninety-three-year-old brother, Amelian “Skinny” Pastuszak. (Paster changed his name after his oldest daughter was bullied at school over it.) 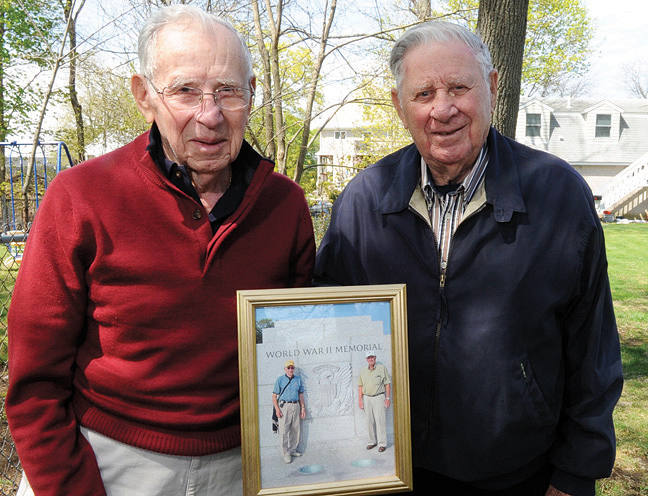 Marc Vasconcellos/The Enterprise
Paster, right, has coffee with his brother in Abington every week. Both fought in World War ll.
Paster joined the army in 1942 after trying to get into what was then known as the Naval Air Forces. He failed his physical for not having two sets of identical opposing molars, a condition that was fine with the army, which then drafted him. He served as a sergeant in the military police, transporting wayward army men back to their platoons after they’d served their time in the stockade. It had its perks, Paster says: “I got the opportunity to travel a lot, taking these guys back to their outfits.” He wound up going all over England and France.

In 1945 Paster escorted a prisoner on an overnight train from Luxembourg to Le Mans, France. When he disembarked, he discovered the war was over: “When I got off the train, a guy said to me, ‘Where were ya? You missed the big party!’”

After he returned home to Abington, which is twenty miles southeast of Boston, Brown recruited Paster to play for the football team, on which he was a quarterback and defensive safety. Football, in fact, dominates Paster’s memories of his time at Brown. He recalls then-coach Rip Engle as “not a screecher or a hollerer, but a real gentleman and a good coach.” Engle got a lot out of his players that way: Paster still shares the NCAA record for most interceptions in one game (five). Being on the football team also meant forging friendships with other veterans, like future Cleveland Browns defensive tackle Don Colo ’50, with whom he’d play hand tennis (tennis with hands instead of rackets) in his downtime.

At Brown, Paster felt a stark difference between returning veterans and the eighteen- and nineteen-year-old freshmen straight out of high school. “I was older and more mature,” he says. “These kids were away from home for the first time.” After graduating, Paster returned again to Abington, where he began a long coaching and teaching career at Abington High. “I really got a kick out of the high school kids,” he says.

After retiring, Paster wasn’t content to sit still. He worked part time as a college scout for the New England Patriots for twenty years. He is now a ninety-one-year-old widower, has downsized to a home in Plymouth, Massachusetts, and remains healthy. “I have troubles with my legs,” he said recently after a golf outing. “But that’s about all.”