Sardinia, the second largest island in the Mediterranean, is one of the oldest continuously populated land masses in the world. Beginning in about 1500 BCE, villages were centered on fortress-like structures called nuraghi. Since summer 2013, archaeologist Peter Van Dommelen has been excavating in Sardinia, looking for clues about prehistoric life there. He particularly focuses on the classical period from 600 to 200 BCE, when the Phoenicians and Carthaginians arrived on the island as conquerors. He paused recently to talk about his work. 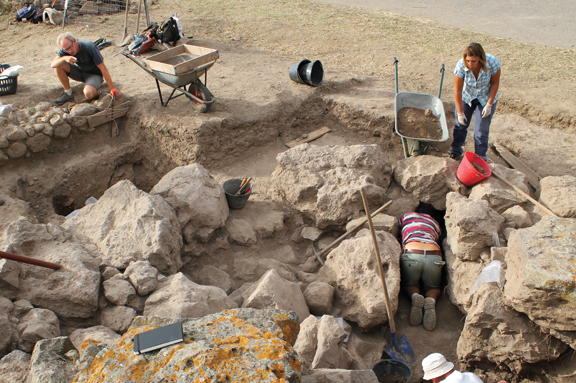 Courtesy Van Dommelen
Buried at this site on the island of Sardinia are clues to how people there lived two thousand years ago.

BAM Why did you choose to study this later period in Sardinia’s history?
VAN DOMMELEN In the course of the first millennium, an enormous change in lifestyle, culture, and building style takes place. The original interpretation was that the Sardinians were forced out of their traditional homes while outside settlers created a colonial landscape.

BAM And that’s not true?
VAN DOMMELEN What we’re finding now is more nuanced than that. People started interacting with newcomers and adopting new ways of life, yet still kept some of their older traditions. And we’re not finding that the indigenous settlements were abandoned.

BAM What was life like during this time?
VAN DOMMELEN The Phoenicians were traders who created a commercial network that reached from modern Lebanon to Spain. They came to Sardinia for minerals and built trading posts. In the later phase, when Carthage becomes the dominant power, the emphasis shifts to agriculture. Agricultural products were used to pay mercenaries. Sardinia became a major producer of grain.

BAM You’ve also found evidence of a significant shift in ceramic pottery.
VAN DOMMELEN The Sardinian ceramic tradition disappears by the sixth century, replaced by Phoenician and Carthaginian pottery. In other words, these people have gone modern. But there’s still a strong emphasis on cattle. The utensils have changed, but what they’re eating has not.

BAM What’s it like to spend your summers off the coast of Italy?
VAN DOMMELEN What’s great is that Sardinia is one of those rare places in the Mediterranean that have been fairly well preserved because it is isolated and remote. The landscape has not been destroyed as thoroughly as elsewhere. You won’t find rows of fifty-story hotels.