People think slavery was horrible, but benign,” says Anthony Bogues, director of Brown’s Center for the Study of Slavery and Justice. This pair of shackles used on a slave ship, which was exhibited this winter at the John Hay Library, helps visitors understand the torture that was an essential part of it, Bogues says. “Slavery is something that inaugurates itself through violence, and continues through violence.” 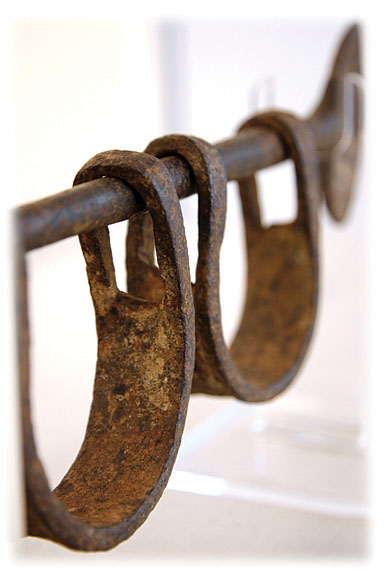 These shackles, on loan from the International Slavery Museum in Liverpool, were displayed with an item owned by the Hay, a collection box from Rhode Island’s abolitionist movement.

“We wanted to juxtapose an instrument of torture, slavery, and punishment—the shackles—with this box, to show freedom and unfreedom,” Bogues says. “The reactions have been remarkable.”

“This is just awful,” many viewers comment, then, unintentionally underscoring the main reason for the exhibit, they add:  “I had no idea.”