Sometimes the best ideas are born from a need—or the desire to stop annoying your dad. One day a few years ago, Marco Santini ’07 and a high school friend decided to see if they could put together 100 ping pong rallies. “We would keep the ball in play no matter what happened,” Santini says. “It went off the ceiling and off the wall. My father, who is an architect and designed our house, wasn’t too happy with us hitting the ball all over the place.” 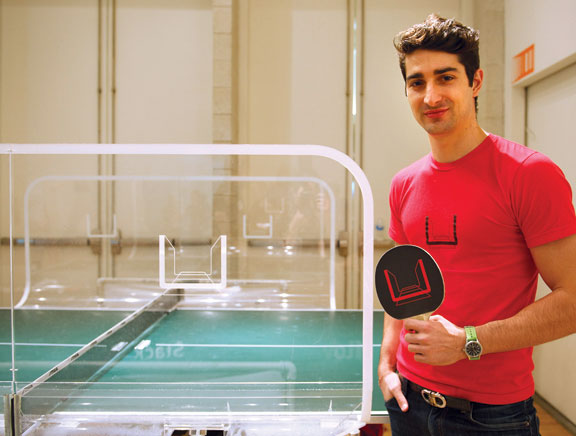 To stay on his father’s good side, Santini moved four chairs next to the table and set up sheets of plywood along the sides to keep the ball in play without hitting the walls and ceiling. “As we continued to play,” he says, “we realized it was a lot more fun to intentionally hit the ball off the plywood.”

Santini and his friends kept at it until Santini’s senior year at Brown, when he took Visual Arts 10. “The final project,” he recalls, “was to make anything creative, and I thought, ‘How cool would it be to create a version of this game?’”

He created a makeshift table that was displayed in List Art Center. “It went over pretty well with the class,” Santini says. “Mine was one of the few that were interactive, so people really wanted to try it out.” He brought the table home to New Jersey, and his friends loved playing on it.

Then Santini had an aha! moment.

“I realized,” he says, “that spectators couldn’t see through these wooden boards! The walls became Plexiglas. Santini also wanted a design that would encourage long rallies, so the Plexiglas sides took on a six-inch curve.

“If you hit the ball in the curve in a perfect way,” Santini says, “it will create a ‘waterfall,’ where the ball gently glides down the curve. That is considered the best shot in the game.”

After completing a prototype in 2013, Santini began to market the result as INCLUSION table tennis. Sports Illustrated took notice, and Google asked to see it in its New York City office.

The following summer, INCLUSION was featured at the Billie Jean King National Tennis Center Camp. The side walls can function as bumpers to help children and novice players improve their hand-eye coordination. The National Tennis Center bought in, and INCLUSION was featured at the hospitality pavilion at the 2014 U.S. Open. Santini later showed off the game at the USA Table Tennis National Championship and then returned to Brown for a demonstration and a tournament with the Brown Table Tennis Club.

Awareness of the game continued to grow: Google had a demo day, with employees playing INCLUSION, and even a London charity, the Bounce Alzheimer’s Therapy (BAT) Foundation, got  into it, seeing the game as a fun way to challenge the brain, to help combat early-onset Alzheimer’s. Eventually, Santini was introduced to Butterfly, the largest manufacturer of table tennis products in the world. That led to a partnership agreement. In October 2015, Butterfly purchased a license to Santini’s patent and plans to introduce INCLUSION worldwide this summer.

“They have huge production and marketing capabilities,” Santini says. “I’m really excited that it has interested enough people to get it to this stage.”

Reader Responses to Beyond Ping Pong