Doug McGray ’97 and Chas Edwards ’92 want your nights and weekends. In the evening, they’d like to see your face in the crowd at Pop-Up Magazine, which describes itself as “a night of new stories, documentary films, photography, art, and radio live on stage” and delivered by storytellers of all stripes. On Sunday, Edwards and McGray want your nose buried in the latest issue of the California Sunday Magazine, a monthly publication distributed in California newspapers. 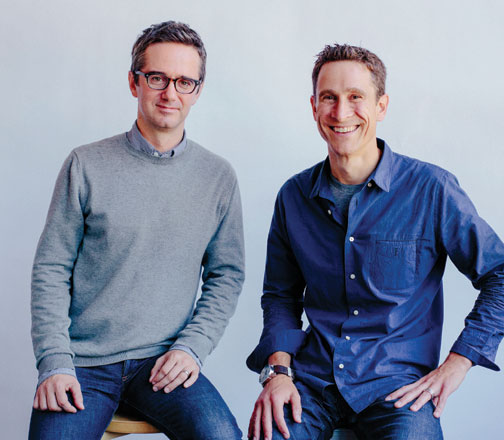 McGray and Edwards are on a mission to create the next version of journalism...and it may be working. Tickets for Pop-Up Magazine performances, which have been staged in San Francisco and other U.S. cities, typically sell out in fewer than 15 minutes. The New York Times has described it as having “the strong editorial sensibility and passion of great magazines” within an oral storytelling tradition. California Sunday, on the other hand, picks up the tradition of the Sunday supplement by publishing in-depth articles focused on California, the American West, Asia, and Latin America.

In one issue you may read the story of a San Francisco design firm that's given itself the ambitious task of "redesigning death," while in others you'll find a blow-by-blow account of what happened when 43 Mexican students disappeared in 2014 or a profile of a Chinese American vintner looking to transform his hometown in China's Shaanxi Province into the next Napa.

McGray, a journalist who freelanced for the New York Times Magazine, the New Yorker, Wired, and This American Life, first met Edwards, the cofounder, publisher, and chief revenue officer (CRO) of Federated Media and the publisher and CRO of the technology blog Digg, while living in the Bay Area. In February 2013, Edwards joined McGray and his collaborators to cofound California Sunday Inc., the company that produces Pop-Up Magazine and publishes the California Sunday Magazine. The team calls their approach “the leisure-time model.”

“You see how these giant media companies spend so much money and make so much of an effort to fight for these tiny slivers of your attention during the daytime,” McGray explains. “Nighttime is different. So is the weekend. These are big chunks of attention you can make a bid for.”To Edwards, having a longer audience attention span offers the opportunity to “build a community around stories so exciting and meaningful that people pay money, pay attention, and lose themselves while they read or listen.”

When California Sunday debuted, its first issue had a circulation of 400,000 readers. McGray and Edwards achieved this sizable reach by striking deals with California metro-area papers to include California Sunday as an insert, filling the need left behind after most newspapers did away with Sunday magazines of their own. That large audience got the attention of such high profile companies and organizations as Lexus and the California Milk Processor Board (the organization behind the Got Milk? campaign), who have since availed themselves of California Sunday’s inventive in-house design and production services. 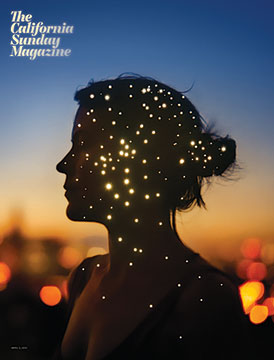 The ads in California Sunday are a distinctive blend of styles: half carefully composed, Ogilvy-style print displays and half latter-day native advertising, a form that seeks to make sponsored content match the tone and feel of an online publication’s organic content. Recent campaigns that have run in California Sunday include a series of animated shorts for Google Play called “California Inspires Me,” narrated by such California artists as James Franco, Jack Black, and Rashida Jones, and a Mailchimp ad campaign called “Threads,” which runs in the magazine’s print edition and features casual e-mail exchanges between like-minded creatives. Past Threads duos have included comedian Margaret Cho and punk rocker Bob Mould, as well as illustrator Maira Kalman and writer Maria Popova. The goal, Edwards says, is to create ads that “stand up in quality to the rest of the content of the magazine.”

It’s worth noting that not every subscriber to the Sacramento Bee or the Oakland Tribune gets a copy of California Sunday each month. The supplement is distributed to readers only in areas within a reader “heat map,” which targets audiences using Nielsen ratings and census data. “The people coming to Pop-Up shows in San Francisco are artists, musicians, designers, architects, entrepreneurs, and media producers in their late 20s to late 40s,” McGray says. “It’s a group of educated, influential people shaping economic conversations, political conversations, and business conversations. When we launched the California Sunday, we wanted to efficiently find more people like that.”

Rather than a media company, Edwards prefers to think of California Sunday Inc. as “a story production company.” McGray says, “Whether it’s an ad or a story, we try and create things that feel kind of cinematic, immersive.” Edwards adds, “We think the best stories are the kinds of stories that you read not necessarily because you’re interested in the topic. Maybe you are or maybe you aren’t. You just got sucked in because you want to know how it ends.”