Part of the Tribe

It wasn’t exactly a scene out of Hollywood casting, but there was plenty of star power when celebrated actor Michael Douglas and iconic Israeli human rights activist Natan Sharansky spoke in the De Ciccio Family Auditorium January 28 to share their “Jewish journeys.” 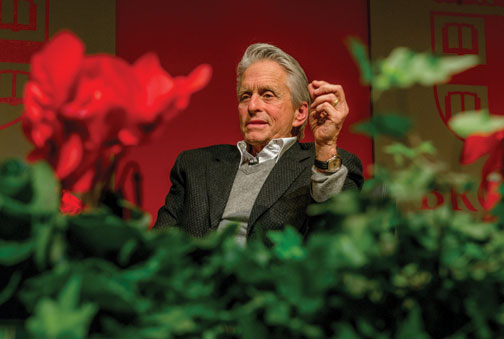 David DelPoio
Douglas went from being unconnected to Judaism to winning the "Jewish Nobel."

Douglas, who won the 2015 Genesis Prize—sometimes called the Jewish Nobel—and Sharansky, a dissident jailed in Russia for nine years and now chairman of the Jewish Agency for Israel, spent more than an hour on stage  talking and taking questions from some of the 500 people in the audience, about a quarter of them students.

Douglas said he spent much of his life with no connection to Judaism. His father, Kirk Douglas, had an Orthodox childhood but fell away from Judaism and married a woman who was not Jewish. “Religion was not a part of my life,” Douglas said, until Dylan, his son with Catherine Zeta-Jones, developed an interest in Judaism and asked to have a bar mitzvah. It was Dylan, Douglas said, who “brought a spirituality to our family.”

Douglas said that when the Genesis Foundation gave him the prize, “It was a cathartic moment for me. I didn’t realize how much I want to be accepted.” He added, “I’m secular. I am just happy to be part of the tribe. Jewish values are a beautiful way to conduct your life.”

Sharansky spoke of how Judaism was suppressed by Soviet authorities for many years. Several Brown students who asked questions were sharply, though respectfully, critical of Israel and the Jewish Agency for the country’s settlement policy. Sharansky denied the Jewish Agency has encouraged any illegal settlements

The evening also spotlighted work started by Brown/RISD Hillel that’s being expanded through Douglas’s prize. As engagement intern for Hillel, Rebecca Carol ’15, began a “Jews of Brown” project, in which students are featured on a Facebook page with photographs and words about what being Jewish means to them. More than 200 student stories are in the continuing project. Hillel International liked the idea—as did Douglas—and it’s going global as “Jews of the University.”

About twenty students representing Students for Justice in Palestine and other groups protested the event from the building’s lobby, holding signs criticizing Israel as an apartheid state and oppressor of Palestinians. During the event, protesters’ chants could be heard in the hall, but none of the demonstrators entered or disrupted the talk.

Douglas is using his $2 million prize money to encourage Jewish diversity, especially for intermarried families. There have been two other Genesis winners so far: Michael Bloomberg and Itzhak Perlman, a Brown parent.

Reader Responses to Part of the Tribe