Our Bodies, Our Selves

The traditional weight-loss story may be the simplest narrative arc there is: from before to after. We’ve seen it a million times—in ads for Weight Watchers or on such shows as The Biggest Loser—and it is admittedly mesmerizing to observe a transformation so neatly packaged, to see the somber, unflatteringly lit “before” morph into the taut, tanned, grinning “after.”

13 Ways of Looking at a Fat Girl, the debut novel by Mona Awad ’14 MFA, offers a powerful reminder that this sort of transformation is anything but neat. This is a tale of the rage and sorrow and hunger that one woman cannot shed as easily as excess pounds. In thirteen vignettes, we follow our protagonist through her weight-loss journey—from her time as Lizzie, the heavy goth teen; to Beth, the depressed, obese college student; to Elizabeth, the fanatically skinny married woman; and, finally, to Liz, the thin but disenchanted divorcée. 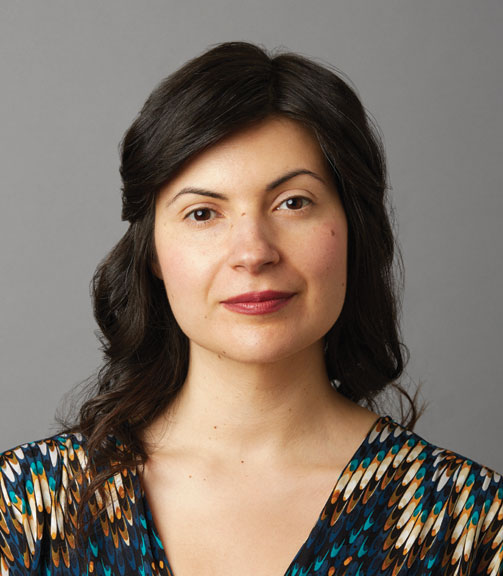 George Baier IV
Mona Awad's '14 MFA offers a powerful reminder that the sort of transformation in her first novel is anything but neat..

At each stage of her life, Elizabeth clings to the hope that there is a secret formula or “one weird trick” that will allow her to feel comfortable in her own skin. When she’s younger, it’s smoky eye shadow applied by an elegant, long-limbed friend, “the kind of girl who looks like she should be walking down a dirt road in a music video.” Later, it’s the possibility that she will be small enough to slip on a tiny von Furstenberg sheath and emerge from the high-end dressing room triumphant.

However oblivious she may be to the futility of her own magical thinking, Elizabeth has no blinders when it comes to assessing others. Her commentary is biting, laying bare the absurdity of the battle against our bodies: “The first thing I see when I wake up each morning is my neighbor Char’s triumph over the ineptitudes of the flesh. . . hunched over Lifecycle One, literally all of her bones from the waist up draped over the handlebars in submission to The Task, which, I can only assume, from this vantage point, is the obliteration of the Body Mass Index.” This dry wit allows Awad to create a richly layered character that is in turn resilient, repellent, and relatable.

It would be difficult to ingest 13 Ways of Looking at a Fat Girl and not recognize something: a childhood friendship or a mother-daughter relationship. Awad’s exquisitely observed narrative feels human and true, in a way few stories about body image in modern media do. In her novel, there’s no “after”—and we’re better for it.

Reader Responses to Our Bodies, Our Selves