It may have taken half a century, but, on the Saturday of Commencement weekend, Brown’s Vietnam veterans finally assembled on campus to tell their stories. Thanks to the efforts of Beth Taylor ’84 AM, ’89 PhD, the co-director of the nonfiction writing program, veterans had a chance to gather and tell their often absurd, often sad stories of fighting in an unpopular war that none of them seemed prepared to enter. 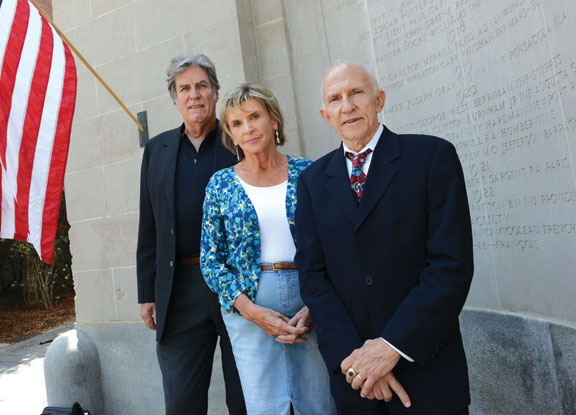 So many alumni wanted to hear these men and women speak that the John Hay Library’s Willis Reading Room, where the reunion was held, couldn’t contain them. David Taylor ’66 (no relation to Beth Taylor), a U.S. Marine Corps captain, spoke first, noting that when he arrived at Brown in 1962 “the Vietnam War was not on anyone’s radar screen.” To pay for his education, he joined Navy ROTC, a smart choice, he figured, until 1965, when President Lyndon Johnson escalated U.S. involvement in the war. After graduation, off he went for infantry training at the marine base in Quantico, Virginia. Eventually he was accepted into flight training for fixed-wing aircraft.

“People were saying the war would be over in a year,” Taylor said. “Flight training would last a year and a half. I did the math.” Of course, the war was only getting started, and Taylor, like most marine pilots, was switched to flying helicopters. He flew 700 combat missions piloting a CH-53 helicopter, mostly evacuating wounded combatants. When his tour of duty was over, he was assigned to the presidential helicopter squad. “I flew Nixon around for a couple of years,” he said, triggering a laugh from his audience.

Next came Elaine Zimmer Davis, whose first husband, Jerry Zimmer ’66, also a U.S. Marine captain and aviator, was shot down on August 29, 1969, in Vietnam’s central highlands. “When a military vehicle pulls up to your home, and your husband is in combat . . . ,” she said, becoming emotional. “To say I was surprised would be a huge understatement. Jerry was an incredible pilot. The enemy got lucky,” she concluded, pointing out that Zimmer had not had a chance to eject from his plane. Elaine Zimmer Davis has long been involved in the effort to retrieve from Vietnam the remains of as many U.S. servicemen and servicewomen as possible, and has written about the subject at her blog, bringingjerryhome.com

“I traveled to Jerry’s crash site with Vietnamese military and U.S. officials,” she said, praising the eagerness of the Vietnamese to help her. “They opened their hearts to me,” she said.

Like Taylor, Barry Kowalski ’66, who commanded an infantry platoon as a first lieutenant in the U.S. Marine Corps, never considered that he might be going to war. Noting that the only demonstration he remembered during his time at Brown was a 1965 food fight that escalated to the point that Providence police were called in, he said, “That was not about social change. We worried about jobs and about the draft, which was going to get you one way or another.”

Kowalski’s strategy, he recalled, was to “find a way to get into the military in a capacity where you wouldn’t get shot at. I was very much against the war.” A marine recruiter painted him a romantic picture of a marine corps that would allow him to serve away from combat, in a support role. So he signed up in July 1966. “That was my first miscalculation,” he joked.

While leading a platoon for six months in Vietnam, Kowalski said, “I suppressed my antiwar views and focused on keeping me and forty other men alive.”

Beth Taylor invited veterans from the audience to take the microphone and tell their stories as Vietnam veterans, and a few did. Taylor, who has been taping the oral histories of Brown’s Vietnam veterans, has, along with David Taylor, convinced Brown archivists to establish a collection of artifacts from alumni who fought in Vietnam.

During the forum, John Rowan, president of the Vietnam Veterans of America, gave University special collections archivist Jennifer Betts a decorative black box from Vietnam. It contained a watch and a knife from U.S. Marine lieutenant John Brooks Sherman ’62, who was shot down on March 25, 1966. A Vietnamese man who lived near Sherman’s crash site had buried his body nearby. In 1990, the body was recovered and returned home, but the man kept a few of Sherman’s personal effects in the black box. Then, in January 2015, the Vietnam Veterans of America returned to the site and showed the man a photo of Sherman. He confirmed it was the man he had buried and gave the group the box containing Sherman’s possessions.

“It is our honor,” Rowan said at the end of the forum, “to present these items to honor your graduate.”