A Nobel for Brown Physics

Recognizing fundamental work that could have implications in such fields as materials science and electronics, the Nobel Committee in October awarded the Nobel Prize in Physics to Brown's J. Michael Kosterlitz, the Harrison E. Farnsworth Professor of Physics, along with two other researchers, David J. Thouless, of the University of Washington, and F. Duncan M. Haldane, of Princeton. 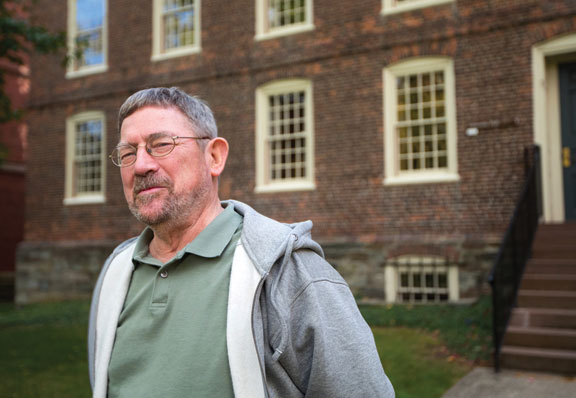 Credit: Nick Dentamaro
The three scientists study materials so flat that they are considered two dimensional. Among these are a superconducteos, superfluids, and thin magnetic films, all of which behave in ways that differ from three-dimensional materials. Discoveries involving the behavior of atoms in such materials have made condensed-matter physics one of the most exciting areas in physics in recent decades.

In the early 1970s Kosterlitz and Thouless, both of whom were then based in England, challenged the prevailing theory about the flat, two-dimensional world by looking at phase transitions. Unlike such common phase transitions as the transformation of ice into water, phase transitions in a flat world act differently.

Kosterlitz and Thouless found a phase transition that explained the behavior of atoms in low-dimension materials at low temperatures; their theory became so widely accepted, it is known as the KT transition. Their work, the Nobel academy noted, “demonstrated that superconductivity could occur at low temperatures and also explained the mechanism, phase transition, that makes superconductivity disappear at higher temperatures.” Key to their work was a branch of mathematics known as topology. Their discoveries, the academy said, "have opened up new fields of research and led to the creation of new and important concepts within several areas of physics."

Reader Responses to A Nobel for Brown Physics