From the President January/February 2017

Although Presidential election campaigns often prompt intense periods of activism on university campuses, reaction continued several weeks after the 2016 election. President Christina Paxson spoke in early December about the impact of the election on Brown.

What impact has the 2016 election had on you as president? 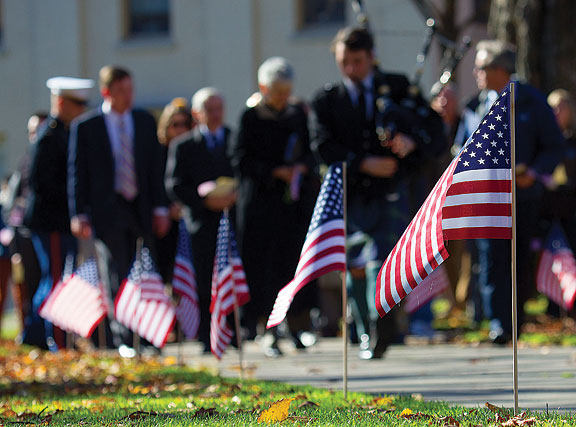 The recent election campaign was divisive. Yes, college students tend to be liberal, and, for many at Brown, the outcome was unsettling. Students are concerned about policy issues like immigration and women’s reproductive rights. They are fearful that the outcome gave a stamp of approval to racism, sexism, and xenophobia. I worry about this, too, especially given the increase in the number of bias incidents reported around the country in the weeks after the election.

Yet not everyone at Brown has liberal political views. Some of our more conservative students, faculty, and staff felt concern about negative labels being applied to them. I heard from some who felt uncomfortable in class or in conversations with colleagues and peers. So our commitment has been to help bring the Brown community together.

This has been a “teaching moment.” A central part of our educational mission is teaching students to lead in a world of diverse perspectives. They simply can’t be successful without that skill.

I joined a statement signed by more than 250 university presidents calling for the continuation and expansion of the Deferred Action for Childhood Arrivals policy, and I reached out directly to Rhode Island’s political and civic leaders.

Universities must make the moral and economic case for supporting these students, many of whom came to the United States as young children and don’t remember the places of their birth. Brown accepts students based on their academic merits and their potential to serve, lead, and innovate. We don’t look at visa status when we make admission decisions. So the idea that this country would deport these amazing young people after years of investment in a great education is ludicrous.

Brown has been clear that we refuse to participate in any action against our undocumented students without a legal warrant or subpoena. We also continue to fund legal workshops and provide other forms of support.

Dozens of small American flags planted on the College Green for Veterans Day were vandalized. What happened?

The destruction of these flags was unacceptable. These were University flags put out for a University event honoring veterans. An investigation revealed that the vandalism resulted from a few students acting individually, and the incidents were addressed as violations of the Code of Student Conduct. I met with student veterans afterward. They are remarkable students, with the wisdom and maturity that comes from military experience. What saddens me is that this incident disrespected them, as well as alumni veterans, at a time when we’re expanding ROTC and seeking to grow the number of veterans at Brown. We will now redouble our efforts to make Brown welcoming to veterans.

This election revealed policy differences on such issues as immigration, climate change, job creation, and global security. What are the post-election opportunities for Brown?

We don’t know yet what the policy consequences will be, but Brown is already deeply engaged in all these issues, through our work at the Institute at Brown for Environment and Society, the Watson Institute, and elsewhere. Our obligation as a university is to contribute to the debate by providing the data, evidence, and analysis that drive sound policy. I tell students that when the country is divided, it is more important than ever to lean in and apply their Brown educations to issues of first-order importance to society.

Reader Responses to From the President January/February 2017