Move over, Pixar and Disney. Biologists at Brown have developed technology that allows them to create animations that show exactly how people or animals move, down to how each bone functions in motion. The technology, XROMM, combines X-rays, CT scans, and high-frame-rate video, all coordinated with special animation software. Scientists not only think that XROMM will reveal more about how our muscles function; they may even be able to use it to figure out how extinct animals really moved. 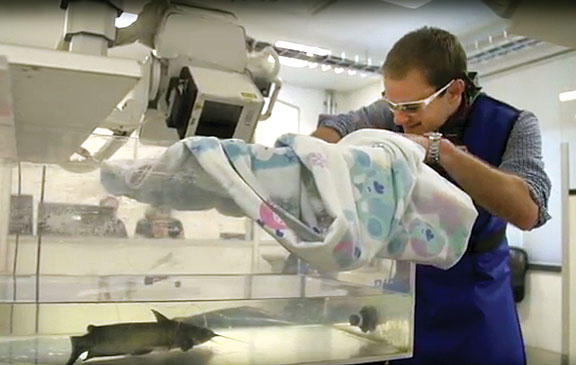 Steven Crocker
The ROMM technology has exposed much new information about how animals, including fish, move.

Biology professors Beth Brainerd and Stephen Gatesy coined the term XROMM (X-ray Reconstruction of Moving Morphology) when they developed it in 2006. Over the last decade, Brainerd and Gatesy, their students, and collaborators from around the world have published papers revealing secrets from under the fur, scales, or skin of alligators, dogs, rats, frogs, pigs, ducks, geckos, fish, bats, iguanas, and—using birds as proxies—dinosaurs. “The range of animals is really part of the fun,” Brainerd says. “The coolest things we’ve seen with XROMM are things you just absolutely can’t see from the outside.”

The technology also has implications for better understanding motion—and injury—in humans. In 2013, for example, Brown orthopedics professor Braden Fleming used the system to study differences in the knees of male and female athletes as they performed a sudden direction-change maneuver called a “jump cut.” They saw that one reason female athletes are injured more often than males is they land the jump-cut maneuver more stiffly and with less of an energy-absorbing knee bend. “For orthopedics research,” says Brainerd, “XROMM provides information that is not available otherwise.”

Ultimately, Brainerd hopes that XROMM will help explain evolution. “If we can understand some very basic relationships between the shape of bones and the way they move,” she says, “we can begin to make sense of all that animal diversity.” Using XROMM, scientists might be able to interpret bone shape and match it to particular ways of moving.

Reader Responses to How We Move