Comedian Al Jackson spent this summer, like the last, on tour with mega-comic Hannibal Buress for one simple reason: “If you do stand-up, you got to leave the house.” Even with regular writing and onscreen acting work, the road is “where you go to hone and polish your act,” Jackson says. 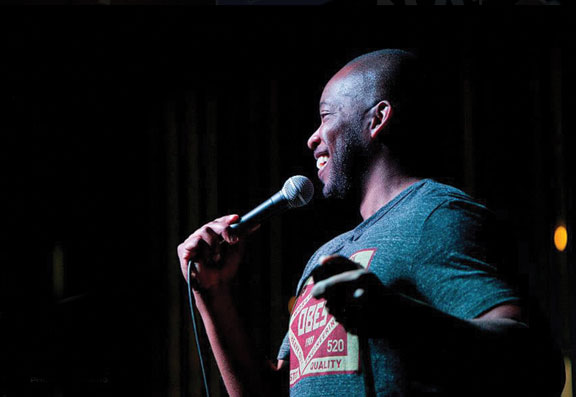 Al Jackson's stand-up career began at an open mic while he was a student at Brown.
That act has long found him crisscrossing the country. Performing a decade ago in the comic hinterlands of Miami, he impressed a vacationing Comedy Central cameraman, which eventually led the network to invite him to New York. His first taped spot showed Jackson disembarking from a school bus in Queens, advertising himself as a “Fresh Face of Comedy,” sponsored by Subway. That led to his televised debut on Live at Gotham in 2007 and, after years of roadwork and showcase gigs, a Comedy Central Presents half-hour set in 2011, de rigueur for up-and-coming comics. Since then, Jackson has been enmeshed in the world of television comedy: performing on John Oliver’s New York Stand-up Show in 2012, hosting the BAFTA-nominated Officially Amazing in 2013, playing himself on Jim Jeffries’s Legit in 2014, releasing an hour-long special last year, and appearing this year on Comedy Central’s @midnight and The Meltdown with Jonah and Kumail.

His route into comedy was circuitous. After an admittedly middling high school career in Cleveland, Jackson matriculated at Tougaloo College, an 800-student historically black school on the outskirts of Jackson, Mississippi, which he credits with “taking a chance on a student like me—I could’ve graduated, or I could’ve flunked out the first semester.” Two years later Jackson spent a summer and two semesters at Brown as part of the Brown University–Tougaloo College Partnership, which offers students from each institution the opportunity to participate in an exchange program at its sister school.

“I thought Brown was the coolest place I’d ever seen,” Jackson says. “You could do literally whatever you wanted to do.” A friend who was performing stand-up comedy convinced Jackson to come along with her to an open mic. “I had just horrible jokes,” Jackson laughs. “At that point it was almost a bucket-list thing, like jumping out of a plane. I didn’t do stand-up again for another five or six years.” In the meantime, he graduated from Tougaloo in 1999 with a degree in biology and returned to Providence for two years to research immune responses in mice at Rhode Island Hospital. After earning his master’s in biomedical sciences from Barry University in south Florida, Jackson began teaching seventh-grade science in Miami.

Soon Jackson began to feel the urge to get back onstage and quickly got hooked. By his third year teaching, he was performing nearly every night: “almost a full-blown comedian who was masquerading as a teacher,” he says. His students became a part of his comedy: he riffs on a white kid who did a Black History Month report on the Wright “Brothers,” and chivalrous boys who walked their girlfriends to class before playing hooky themselves.

A move to L.A. later, the road still keeps him sharp. Even though it’s not always cushy—“How many Ramada Inns can you stay in before it’s bad for your health?” Jackson asks—he appreciates where he is. “It’ll be two straight summers just touring with one of my good friends,” Jackson reflects. “Life gets worse from here, you know?”