This fall, an international team of scientists, including Assistant Professor of Engineering David Borton, used a wireless “brain-spinal interface” to bypass spinal cord injuries in a temporarily paralyzed pair of rhesus macaques, allowing them to walk. Instead of movement returning in a month, as is typical with such injuries, it returned instantly when the implanted devices were turned on. In a Nature article with Borton as a lead author, the researchers said this is the first time a neural prosthetic has been used to restore walking movement directly to the legs of nonhuman primates. 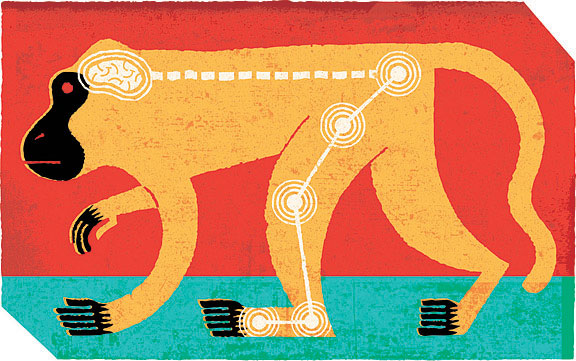 Building on technologies developed at Brown and partner institutions that allowed paralyzed individuals to move a robotic arm just by thinking about it, this work could help develop a similar system for humans with spinal cord injuries.

Grégoire Courtine, a professor at the École polytechnique fédérale de Lausanne who led the collaboration, urges caution, however, even as he begins clinical trials in Switzerland to test the spinal part of the interface: “It may take several years before all the components of this intervention can be tested in people.”

Walking is normally possible thanks to a complex interplay among neurons in the brain and spinal cord. Electrical signals originating in the brain’s motor cortex travel down to the lumbar region in the lower spinal cord, where they activate motor neurons that coordinate the movement of muscles responsible for extending and flexing the leg. Injury to the upper spine can cut off communication between the brain and lower spinal cord. Both the motor cortex and the spinal neurons may be fully functional, but, disconnected, they are unable to coordinate their activity. The goal of the study was to re-establish some of that communication.

Using a pill-sized electrode array implanted in the brain, the new system records signals from the motor cortex and transmits them wirelessly to trigger the electric stimulation of the nerves in the lower spine that control walking, thereby reconnecting the motor cortex to the nerves it directs.

“With the system turned on,” Borton says, “the animals in our study had nearly normal locomotion.” The wireless neurosensor, which was developed by a team that included Borton, transmits the signals gathered by the brain chip wirelessly to a computer that, after decoding, sends them back to an electrical spinal stimulator implanted in the lumbar spine, below the area of injury, where it can trigger the spinal nerves that control locomotion. Borton says this wireless technology will be a critical part of helping human patients perform the activities of daily life.

Still, there are limitations. While the system used in this study successfully relayed signals from the brain to the spine, for example, it can’t return sensory information to the brain. Also, the team was unable to determine how much pressure the animals could apply to the affected leg.

Despite the limitations, the stage is now set for future primate studies and, the researchers hope, for a role as a rehabilitation aid in humans.

“There’s an adage in neuroscience that circuits that fire together wire together,” Borton says. “By engaging the brain and the spinal cord together, we may be able to enhance the growth of circuits during rehabilitation.”