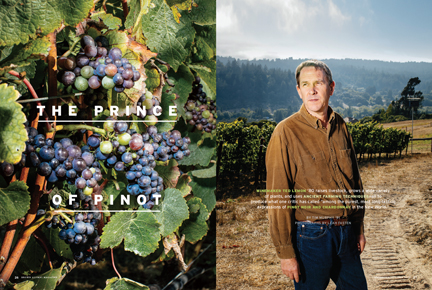 I am writing with respect to “The Prince of Pinot,” your fine article about Ted Lemon ’80, Littorai Winery, and Ted’s progressive organic farming practices (September/October).

My siblings and I own Knudsen Vineyards (www.knudsenvineyards.com), one of the earliest and largest vineyards in Oregon’s north Willamette Valley with a focus on pinot noir and chardonnay grapes and wines. In 2012, we decided to recommence making our own wine with a Knudsen Vineyards label. I contacted Ted to introduce myself, learn about his wine journey, and further my education about the wine business. Ted was extraordinarily gracious and invited me to visit Littorai so we could meet and chat in person. I am grateful to Ted for his generosity of spirit and for sharing both his outstanding wine and his extensive knowledge and experience growing grapes and making wine in France, California, and other winemaking regions of the world.

The article noted several other Brunonians making wine in California. I think it would be interesting and fun to catalog those Brunonians involved in the wine business in other regions as well. I suspect that there are many of us smitten with the beauty, power, and grace of the noble vine.

The women of Brown continue to inspire and reach for the heavens (“Gravitational Pull,” November/December). How awesome is this!

If bringing a saxophone is important, Jessica Meir ’99 could look into getting a xaphoon, a very small and very portable version of a sax.

Imbrie pioneered the use of biometrics in analyzing morphological data in paleontology during a relatively brief tenure as an American Museum of Natural History invertebrate paleontologist and as a professor of geology at Columbia from the early 1950s until 1967, when he joined Brown, changing his research from the systematics and paleoecology of Paleozoic brachiopods to paleoclimatology, an interest that began while he was studying deep-sea microfossil cores at Columbia’s Lamont-Doherty Geological Observatory. At Columbia he became known for his advocacy of statistical paleontology, influencing such notable students as Niles Eldredge and Stephen Jay Gould as well as another early pioneer in statistical paleontology, David Raup. (Raup visited Columbia to study biometrics with Imbrie while working on his PhD at Harvard.)

Among Imbrie’s notable achievements in statistical paleontology, the most important may be his advocacy of factor analysis, which was used for both paleoecological studies and understanding aspects of growth and form in brachiopods, long before he applied it toward studying foraminifera and other aspects of paleoclimatology. Suffice to say that Imbrie was one of the most important geologists of our time.

Professor of Philosophy Felicia Nimue  Ackerman’s implied assertion that today poetry is a worthless undertaking perpetrated by a gang of lazy frauds is deeply saddening (“Poems Don’t Suck,” Mail Room, November/December). Were she to read the entirety of Spring and All, William Carlos Williams’s seminal modernist work, in which he toggles between bursts of prose and verse, Ackerman would read precisely the type of poem she mocks with glee in her letter to the editor:

so much depends
upon

beside the white
chickens.

While, to my mind, Williams has constructed a powerful poem with striking images and powerful, jarring rhythms (note the varying stresses in each of the two-syllable words that stand alone as line two in each couplet), within the larger structure of his exquisitely composed book, this koan is breathtaking.

Go ahead and mock the poets, Professor Ackerman. They’re marginalized in this extended commercial republic anyway. But consider that there are serious pursuits underway in contemporary global poetry, including in the work of our alumni and faculty: Edwin Honig, Michael S. Harper, and C.D. Wright, among those we’ve recently lost, as well as Forrest Gander, Cole Swensen, and Keith Waldrop—writers who continue to push literary boundaries with rigor and accomplishment.

There is a danger in titling a book The Hatred of Poetry. Some may mistakenly assume that Ben Lerner ’01, ’03 MFA, meant for us to take him literally, when he, like Marianne Moore in her day, is doing everything possible to defend, define, and discourse on sweet poetries.

When I saw the video of a student walking across the College Green plucking Veterans Day flags out of the ground and throwing them in a pile, I was disgusted (“Reacting to Trump,” Elms, page 10). It was also emblematic of the leftist attitudes that have pervaded Brown since I left.

Students who participated in any disrespect of our flag, especially on Veterans Day, are in my opinion, not qualified to be at Brown. It’s one thing to be upset about the election of Donald Trump; it’s quite another to vent your frustration by abusing our flag and veterans. Hopefully, the University has made it clear by now that it does not condone such acts and will promote an awareness of the flag and flag protocol among Brown students.


Never in my forty-six years as an alumnus have I been as saddened and disgusted by events at Brown as I was by the disgraceful, hateful, loathsome, and insulting behavior toward veterans on this past Veterans Day. The destruction of memorial flags cannot be condoned and must be punished. This is not an example of free speech. It is an example of expressed hatred of the very persons who sacrificed their lives to allow the freedom that is present and prevalent in the United States.

As a member of a multigenerational Brown family with many veterans, one who died only last spring, I must express my sense of failure of the University toward us alumni for having allowed an atmosphere where such hate can exist. While Brown was thought of as a future beneficiary of my estate, I must admit to having changed my mind. I cannot, in good conscience, support hatred.

I was pleased to read the tributes  to Catholic chaplain Howard O’Shea and English and comparative literature professor Sears Jayne in the November/December BAM (“The Counsel of Fr. O’Shea” and “A Brilliant Lecturer,” Mail Room). Like one of the writers, though, I was dismayed to find that BAM’s own tribute came belatedly in the form of these letters. Father O’Shea was one of the first people I met at Brown. The face he presented then was the same face he would always present: cheerful, honest, and critical, and those all at once.

When I came to Brown as a graduate student in 1979 I had never heard of Sears Jayne. But one of the first things I learned was that Professor Jayne was about to retire and therefore taking on no more graduate students. The undertone was unmistakable: you’ve missed something.

I strongly suspect that his passing, like Howard O’Shea’s, merited more than the perfunctory obituary published.

With Philip Coleman (Trinity College  Dublin), I am coediting a volume of John Berryman’s letters, under contract to Harvard University Press. Because Berryman was a visiting professor at Brown in 1962 and 1963, we believe some of your alumni may possess unpublished letters from the poet.

We would like to consider these for inclusion in our book. If any readers believe they might have material of use, please contact us at: Dr. Calista McRae, Department of Humanities, New Jersey Institute of Technology, Newark, N.J. 07102. Or reach me at mcrae@njit.edu  or (774) 200-5628. Or contact Dr. Philip Coleman, School of English, Trinity College, Dublin, Dublin 2 Ireland; philip.coleman@tcd.ie