“You never know where life and circumstance will  take you,” Maria Kasparian ’05 tells me over the phone. At age 33, Kasparian is the chief executive officer of Edesia, a nonprofit in Quonset, Rhode Island, that manufactures the leading treatment for childhood malnutrition. Since production began in 2010, Edesia has reached 4 million children worldwide. 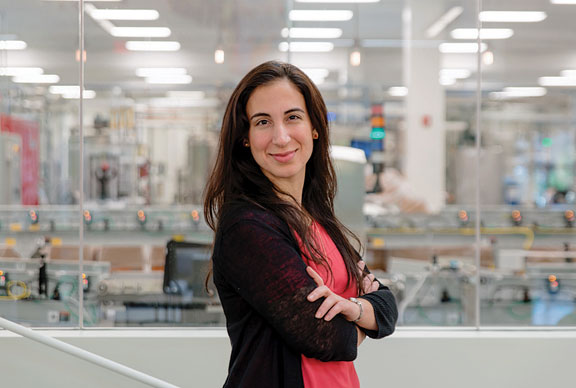 The cure is a Nutella-inspired peanut-based paste; soft, sticky, sweet, and packed with calories and micronutrients, developed in 1996 by the French company Nutriset. A two-month, thrice-daily course of the foil-wrapped treat, brand name Plumpy’Nut, has an astonishing 90-95 percent success rate, restoring even a skeletally malnourished infant to normal weight. The key to its success is its convenience: it can be given at home by the infant’s caregiver, and no preparation (refrigeration, cooking, or water) is necessary. Plus, it tastes yummy.

A Rhode Island native and an international relations concentrator at Brown, Kasparian aimed to become a citizen of the world. Her longtime passion has been to develop a “greater world perspective,” and she has worked and studied in Madagascar (while a Brown student), at a rural village in Bangladesh (during a stint in the Peace Corps), and in West Bengal (while completing an MPA in international studies at Rutgers). “When I got back from India,” she says, “I was pretty sure I was going to end up in Washington, D.C., where the headquarters of many international nonprofits are.”

Then, in 2008, while finishing her master’s thesis, her mother, a high school teacher in Portsmouth, Rhode Island, broke her wrist. Kasparian moved back home to help. A former high school teacher introduced her to Navyn Salem, the wife of Paul Salem ’85, a private equity financier. With $2 million of family money, Navyn had founded Edesia in order to build a factory in Tanzania to produce the newly developed cure for acute child hunger.

In early 2009 Kasparian signed on to Salem’s mission. “Within three months, I knew that we were really onto something,” she says. When offered her “dream job” that same year at the Centers for Disease Control and Prevention’s Global AIDS Program office, she was faced with one of life’s classic choices: to take the beaten path or to risk trying to blaze a trail. “I hemmed and hawed, but my gut said, ‘No! We are going to make our own global avenue right here in Rhode Island.’”

Working from the spare bedroom in Salem’s Barrington, Rhode Island, house, Navyn and Kasparian had to learn how to build a food processing facility from scratch. Manufacturing is still a male stronghold, but they conquered it—fast. By early 2010 Edesia 1.0 was up and running. They recruited staff among refugees from Haiti, Burma, and other countries that receive Plumpy’Nut. They sold the product to such leading relief agencies as USAID, UNICEF, and the World Food Program, then plowed the profits into building additional manufacturing capacity.

Edesia 2.0 opened in May 2016 in a bright, shiny, freshly built 85,000-square-foot manufacturing facility in Quonset. With state-of-the-art automation, production has become faster, safer, and more precise. Operating around the clock five days a week, Edesia combines about 90,000 pounds of peanuts, 110,000 pounds of sugar, 72,000 pounds of sweet whey powder, 87,000 pounds of milk powder, and 95,000 pounds of vegetable oil to make Plumpy’Nut. The staff consists of seventy men and women from twenty-four different countries. “Every day there is a new challenge or a new crazy thing to tackle,” Kasparian says. “I am never bored—that’s for sure.”

To the daily challenges are added the occasional crises. In October 2016 Hurricane Matthew ravaged Haiti, leaving more than 1 million people in dire need of food. “We got a call on a Friday afternoon from USAID asking if we had a large supply of product in stock and if we could ship it out that weekend for an emergency airlift from JFK Monday morning,” Kasparian recalls. “We said yes and yes.” She and her team reconnoitered on Sunday—just as the storm hit Rhode Island—and loaded 6,670 boxes of Plumpy’Nut onto six thirty-foot trucks, enough for 16,000 children over two months.

Kasparian and Salem have set their sights on getting Plumpy’Nut to 20 million children worldwide by 2020. This will require a fivefold increase in output, but Edesia has a record of meeting steep challenges. “I know how lucky I am to have an occupation that is really a mission that I am so passionate about,” Kasparian says.

Reader Responses to Feeding the Hungry