For the first time since 2009, sociologist Mohammed Ali Kadivar, a postdoctoral fellow at the Watson Institute, fears he may not be able to travel to the American Sociological Association’s annual conference, which is scheduled for August in Montreal. 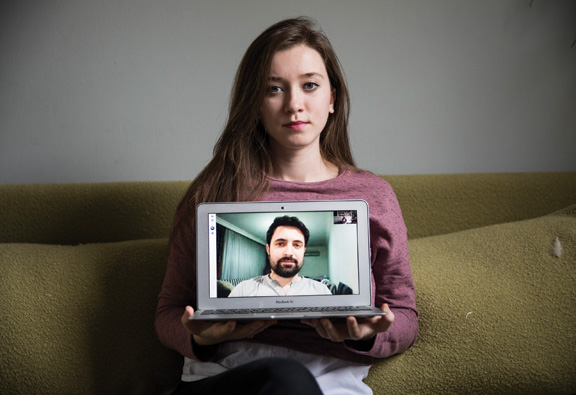 Damon Winter/The New York Times/Redux
At press time, Khaled Almilaji MD, a Brown grad student, was still in Turkey as a result of the travel ban. His wife, Jehan Mouhsen MD, keeps him posted about her pregnancy via video chat.

Kadivar, an Iranian who relies on a visa to work at Brown, was one of the scholars afraid to travel outside the United States after President Trump issued his infamous January 27 executive order banning people from seven countries, including Iran, from entering the United States. (Judges quickly blocked the executive order, ruling that it may have violated constitutional protections for people with legal status to be in the United States. As the BAM went to press, the president was preparing to enact a new, reportedly less draconian ban.)

“We are now entering a situation of great uncertainty,” Kadivar says. “[The travel ban] generates a lot of anxiety.”

Twenty-two Brown students are from five of the seven countries targeted by the original Trump ban. While most of them, like Kadivar, were concerned that they might not be able to return if they traveled back to their home countries, Khaled Almilaji, a Syrian doctor pursuing a master’s in public health, found himself stranded outside the United States when he tried to get his visa reissued in Istanbul. His pregnant wife remained in the U.S.

A frustrated Brown administration swiftly condemned the executive order, and Provost Richard Locke and President Christina Paxson sent out a campuswide e-mail offering legal and immigrant counseling and housing to those affected by the ban. On the academic side, they suggested using virtual teaching technology to continue the education of anyone stranded off campus and advised international students to avoid traveling outside the country. They also said the University would “provide up-to-date medical, security, and other forms of travel assistance” to anyone in the Brown community traveling abroad. “[The ban] is antithetical in letter and spirit to our insistence that individual students and scholars should be free to pursue their scholarship and learning without fear of intimidation or discrimination of any kind,” Paxson wrote in an e-mail to campus. 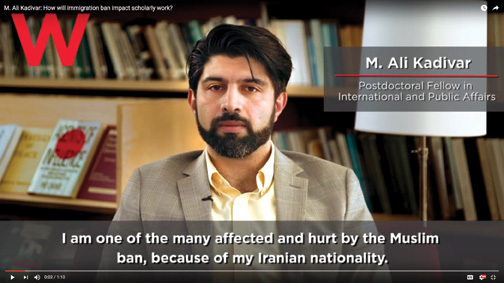 Watson Institute
Sociologist Mohammed Ali Kadivar, a postdoctoral fellow at the Watson Institute was one of the scholars afraid to travel outside the US after the executive order was issued.

Among the undergraduates the ban has affected is Vafa Behnam ’20, who is from Iran. Behnam, who is studying computer science, worries that he might not be able to renew his visa when it expires in summer 2018. “I felt personally attacked when the ban was signed into law,” Behnam says. “It’s frustrating—what do I have to do to prove to people that I am not a threat?” Behnam says he underwent an exhaustive application process that spanned seven months and included a trip to Turkey to interview for his visa at the U.S. embassy in Istanbul.

Bardiya Akhbari, a postdoctoral student from Iran, arrived at Brown last fall and has been in the United States for the past two-and-a-half years. Shortly after Trump announced the ban, Akhbari’s mother called from Tehran, crying. She hadn’t seen her son in eighteen months and had arranged for a visa appointment in late February in hopes of visiting her son on campus. The U.S. embassy cancelled her appointment.

“Before that, I was thinking about staying in the U.S. for work or continuing with my academic work,” Akhbari says. “Now I’m thinking about going somewhere else after my PhD or going back to Iran.”

Akhbari adds that he is grateful to the Paxson administration and to faculty and fellow students for their support during the days following the issuing of the travel ban, a sentiment echoed by others across campus. Various campus groups also organized teach-ins and community gatherings around the issue.

Brown joined sixteen other universities—including all the other Ivies—in an amicus brief in one of the cases that resulted in the courts rejecting the ban. But uncertainty continues. “We don’t know what to expect, so the kind of vantage point we are taking is proactive and reactive,” says Assistant Provost Shontay Delalue, who through the Office of Global Engagement heads a task force meeting weekly to deal with the issue. The office has created a page on its website for updates about Trump travel bans, and the Global Brown Community Support Network set up a hotline for international students.

“The response from many Americans protesting at the airports was very inspiring to me,” Behnam says. “I felt vindicated that people were protesting for immigrants—I don’t think I would ever see that in my country. Still, I continue to have this apprehension, worrying about the future here.”