By Clementine Quittner '19 / March/April 2017
March 2nd, 2017
Jayna Zweiman ’01 couldn’t attend January’s Women’s March on Washington, but her presence was evident in almost every photo of the crowd. Zweiman was one of the people responsible for the sea of pink formed by “pussyhats,” the ubiquitous hand-knitted headgear featuring cat ears that many protesters chose to wear. The hats were a defiant and highly visible response to Donald Trump’s statement in the infamous Access Hollywood video, in which he claims that when you’re a “star” like him you can “do anything,” including “grab [a woman] by the pussy.” 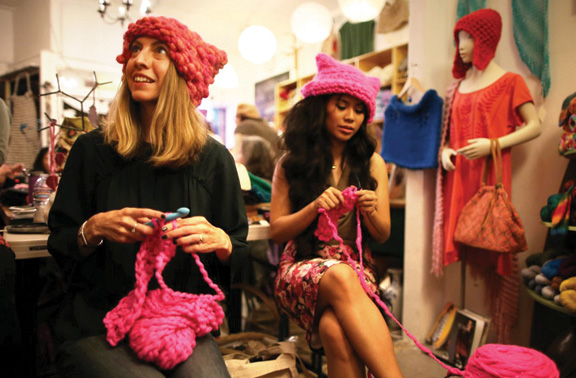 Lucy Nicholson/REUTERS
Jayna Zweiman ’01, left, and Christa Suh came up with the idea for
the now-iconic pink “pussyhats.”

For Zweiman, the pussyhat represents a reclamation of a sexist word and, through the color pink, the power of the feminine. But the idea came out of something much simpler: While recovering from a concussion (the reason she couldn’t get to Washington), she took a knitting class with a friend and in the process realized knitting hats could be the perfect way to bring marchers and non-marchers together. She and her friend Krista Suh launched the Pussyhat Project on November 22 last year.

In this age of Snapchat and Instagram, a visible symbol like the pink pussyhat could make a difference, thought Zweiman, who was a visual arts and economics concentrator at Brown and went on to get a master’s in architecture from Harvard. She explains that she and Suh considered “the practical idea of the drone shot or the shot from above” and picked the color pink in part because it’s so bright. And, in case you were wondering, those are indeed kitty-cat ears, not anything else. The hats are not a literal reference to Trump’s words, Zweiman said: “We’re not putting genitalia on our heads.”

Zweiman’s knitting teacher, Kat Coyle, designed a simple pattern, which the women posted online. In an effort to make the project inclusive, Zweiman said, the pattern specifically called for a type of yarn that is cheap and accessible. It worked. Soon thousands of knitters from all over the world armed themselves with knitting needles and brought their hats to drop-off points and knitting store “allies” that were organized internationally. “A marcher isn’t just representing herself,” Zweiman says, “but her hat-maker too.”

For many, knitting a pussyhat was an introduction to activism. Some had never picked up knitting needles before. “People would get in knitting circles and really bond with each other,” Zweiman says. “After the 2016 election, which was just mean, it was nice to take the humanity back.”